Aerocene {www.aerocene.com} is a series of air-fueled sculptures that are inflated with air, lifted by the sun and carried by the wind.  It sets off for the longest synergetic journey around and with the planet. Aerocene is a new journey around the world without engines, becoming buoyant only by the heat of the Sun and infrared radiation from the surface of Earth. Aerocene floats in the air without burning of fossil fuels and hydrocarbons, using solar panels, batteries or helium, hydrogen and other rare gases from the ground.

During the day, necessary heat will be supplied by the sun. At night infrared radiation from the earth provides the heat. Throughout the day, the air loses energy to the surrounding air. The heated air inside the envelope expands, creating a buoyancy force that lifts the sculpture. Navigation is possible by changing the altitude to move with the local jet streams.

Led by Tomás Saraceno, Aerocene is an open movement where leading artists, scientists, engineers, social scientists , and numerous universities, research centers, cultural and art institutions and museums around the world are involved. 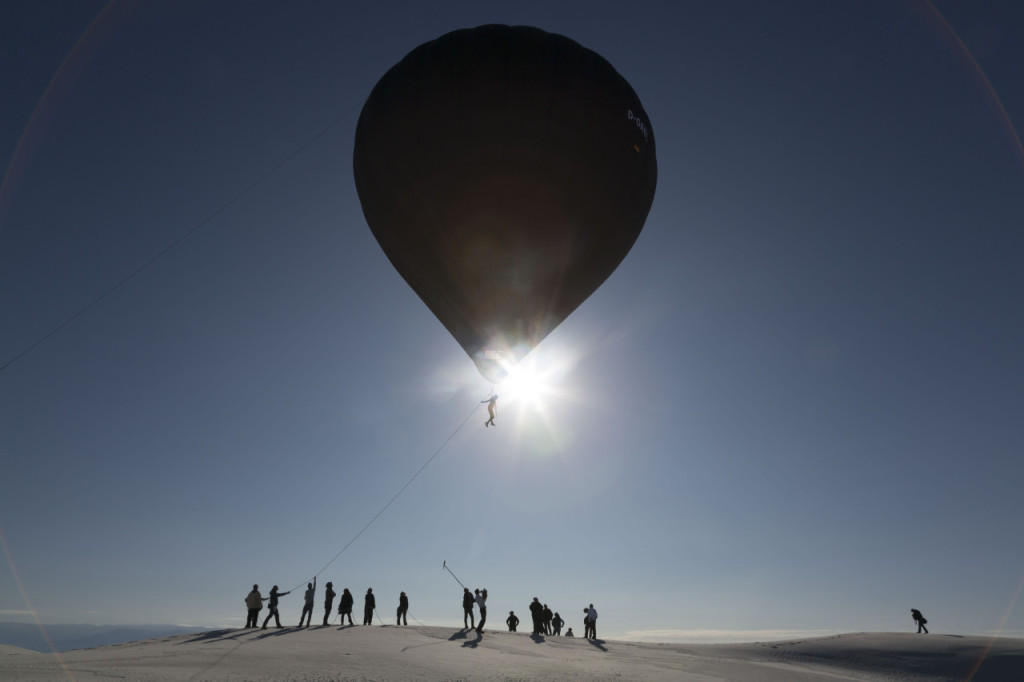 Aerocene launches at White Sands Dunes 2015. The launches in White Sands and the symposium “Space without Rockets”, initiated by Tomás Saraceno, were organized together with the curators Rob La Frenais and Kerry Doyle for the exhibition “Territory of the Imagination” at the Rubin Center for the Visual Arts. credits: the artist; Tanya Bonakdar Gallery, New York; Andersen’s Contemporary, Copenhagen; Pinksummer contemporary art, Genoa; Esther Schipper, Berlin.
Photography Studio Tomás Saraceno.

The project has evolved from Tomás Saraceno’s {www.tomassaraceno.com} artist in residency programme at L’Observatoire de l’Espace, CNES (French National Space Agency) and their InfraRed Mongolfière MIR. Trajectories are computed in details, between 15km (tropopause) and 38 km of altitude, based on our knowledge of thermal effects and stability of the main jet streams.  The project aims to travel numerous times around the globe.

Scientific sensors can be loaded on board to follow the path of the sculpture and record interesting meteorological parameters.  It’s important to note that the project has a strong focus on participative actions, co-creation and do-it-together practices, in order to give up all the hierarchies, predefined entities and organizational models.

Michael Kezirian, Editor-in-Chief of the Journal of Space Safety Engineer and Adjunct Associate Professor of Astronautical Engineering at the University of Southern California is working with the team to obtain the appropriate certifications for the Aerocene’s flight from the respective national agencies.  For objects launched from the United States, the Federal Aviation Authority (FAA) provides licenses based on the assessment and proper mitigation to the risk to the public.  The concern is both for the public on the ground and in the air.  To obtain this certification, Michael Kezirian and his students at USC will work through the full lifecycle of the project, from early design through operations to assure that the Aerocene project during its launch, multiple year planned operation and disposal will not adversely affect the airspace around the world.

While international treaties were ratified, governing civilian airspace, and led to the establishment of the International Civil Aviation Organization (ICAO), no such rules of the road exist for suborbital airspace.  The International Association for the Advancement of Space Safety (IAASS) has sought international cooperation to extend the domain of the ICAO to the stratosphere, considering the rise of numerous private companies seeking to commercialize this airspace.

An additional concern of the Aerocene project is to establish the right of way for future manned flight through such zero carbon emissions vehicles, it is important to first establish the framework for such hypothesis.  The project is leading an online petition, which calls for the agreement to mirror the ocean transport that provides the right of way to unpowered ships.