This week has seen the deaths of two spacefarers: NASA’s Dale Gardner, veteran of two Shuttle missions and Russia’s Valery Kubasov who flew three Soyuz missions, including the Apollo-Soyuz test project. Both Gardner and Kubasov died on February 19. 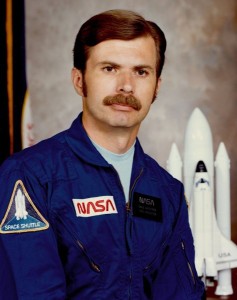 We bid farewell this week to former Naval pilot and NASA astronaut Dale Gardner, who died on Wednesday, February 19 from a brain aneurysm – he was 65. During his NASA career, Gardner flew two shuttle missions: STS-8 in 1983 aboard Challenger, and STS-51A in 1984 aboard Discovery.  During these two missions he logged more than 14 days in space.

Gardner’s first shuttle mission, STS-8, deployed the INSAT-1B satellite. He is best remembered for his work during STS-51A, the first salvage mission conducted in space history. Gardner successfully captured two satellites. loading them into the shuttle to return them to Earth for repair. He performed his EVAs in space untethered using NASA’s Manned Maneuvering Unit (MMU), and was the last of only six shuttle astronauts to ever do so (MMU’s are no longer used, astronauts now wear a similar backpack device for emergency purposes).

Just prior to the loss of space shuttle Challenger in 1986, Gardner was in training, scheduled to fly again on the first space shuttle mission to launch into polar orbit from Vandenberg Air Force Base (VAFB) in California. Due to safety concerns after the Challenger accident, the launch was canceled along with the VAFB shuttle program.

In October 1986, Gardner retired from the astronaut corps and was assigned by the Navy to U.S. Space Command in Colorado Springs. For two years he acted as the deputy chief of Space Control Operations in Cheyenne Mountain before being promoted to Captain and becoming deputy director for Space Control at Peterson Air Force Base. In that position, Gardner’s responsibilities included surveiling and tracking all man-made objects in Earth orbit and the protection of U.S. and friendly space systems.

An avid sports enthusiast, Gardner enjoyed snow skiing, golfing, tennis, and jogging. Other interests included woodworking and photography. Gardner was father of  two children, Lisa and Todd (deceased), from his first marriage to Sue Ticusan. He is survived by his current wife. Sherry, his daughter Lisa, and stepchildren, Erika and Christopher. 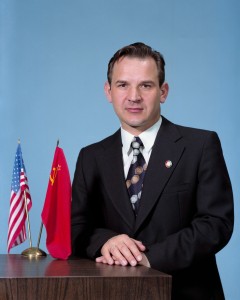 Russian cosmonaut Valery Kubasov, who flew on the first joint US-Soviet space mission, died earlier this week at the age of 80, the Energia space company has said.

Kubasov, twice named Hero of the Soviet Union, flew in space three times, including on the historic Apollo-Soyuz mission in 1975 that saw an American Apollo and Soviet Soyuz spacecraft dock with one another.

A photograph of crewmate Alexei Leonov and US astronaut Thomas P. Stafford shaking hands across an open hatch became a symbol of the easing of tensions between the two Cold War rival superpowers during the decade of detente in the 1970s.

Kubasov had previously flown in 1969 on the Soyuz-6 mission, which took part in the first formation flight of three spacecraft.

On his final mission in 1980 he commanded the Soyuz-36 mission and spent two months aboard the Salyut-6 space station.

Kubasov, originally trained as an engineer, remained active as a manager and technical consultant in Russian space projects in the post-Soviet era.

A funeral service in Moscow for the cosmonaut was scheduled for Saturday.