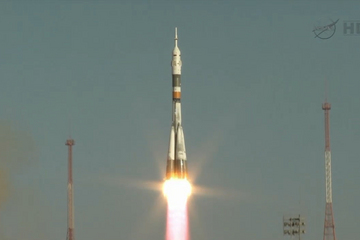 On Tuesday, October 23, the Soyuz TMA-06M space capsule was launched aboard the Soyuz rocket from the Russian Cosmodrome  in Baikonur, Kazakhstan. The spacecraft with three astronauts aboard is now on the way towards the ISS where it is expected to dock on Thursday morning.  Russian astronauts Oleg Novitskiy and Evgeny Tarelkin, and American Kevin Ford will join the first half of the Expedition 33 crew who have been at the space station since July. 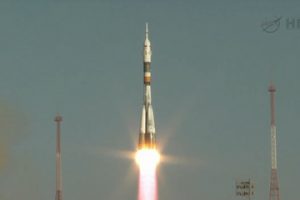 The Soyuz TMA-06 was successfully launched atop the Soyuz rocket from the launch pad 31 (Credits: NASA).

The rocket took off on time at 10:51 GMT from  launch pad 31. It was the first time in 28 years a manned mission was launched from this site. Usually spacecraft carrying a human crew is launched from the historic launch pad used for the 1961 spaceflight of Yuri Gagarin.  Currently, this pad is undergoing reconstruction which means a backup facility had to be used.

The launch was initially scheduled for October 15 and was postponed to allow for a piece of on-board equipment  to be replaced. For both of the Russians, it is their first journey to space, whereas flight engineer Ford  already travelled to ISS  in 2009. Ford is expected to take over command of the expedition from Sunita Williams who will leave the station together with Japanese astronaut Akihiko Hoshide, and Russian cosmonaut Yuri Malenchenko in November. 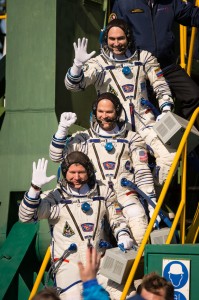 Russian astronauts Oleg Novitskiy and Evgeny Tarelkin, and American Kevin Ford ready to take off towards the ISS (Credits: NASA).

Part of Expedition 33’s agenda is to conduct a study on 32 medaka fish that also hitched a ride to the space station on the Soyuz capsule. The experiment should reveal how fish adapt to the absence of gravity. The fish will live inside a space age fish tank, called the Aquatic Habitat, which was delivered to the space station on an earlier flight: “I’ve got training on these fish…they’re a bit larger than guppies,” Ford said before the flight.

And there are other upcoming tasks: on Sunday, October 28, the departure of Dragon is planned to conclude NASA’s debut commercial cargo delivery. At the end of the next week, the docking of Russion cargo vehicle Progress is expected. On Thursday, November 1, the spacewalk of Williams and Hoshida is scheduled to fix an ammonia leak in the station’s cooling system.