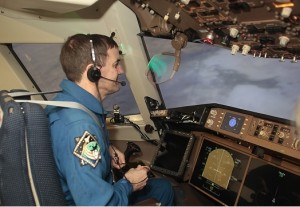 The Dream Chaser flight simulator, being put to use at NASA’s Langley facility (Credits: NASA).

The need for safety standards and applicable regulations in the field of spaceflight training is real and compulsory. The Black Sky Training company received a commercial spaceflight safety approval for their training procedures, the first in the genre of suborbital flight simulations awarded by the Federal Aviation Administration (FAA). The March 28th certification set the bar high for future, similar training programs offering scenario based physiology altitude training, including hypobaric chambers, centrifuges and flight simulations for crew or commercial investors. The approval communicates a clear interest in public safety at the highest level possible: space travel.

Black Sky Training specializes in hands-on flight training with real vehicles as future astronauts and commercial crews need to train to real-time safety regulations as well as protocol. Master Certified Flight Instructors lead training courses with Advance Ground Instructors to give trainees the best possible experience while minimizing the potential for future accidents. A space tourist should ideally be able to follow emergency contingency plans as calmly as a vehicle pilot or mission specialist. This FAA certification serves as the first step towards safer commercial suborbital operations, ensuring that every traveller, including tourists, will have basic educational knowledge of spacecraft operations and the hazards of space flight.

Currently accepted into the 20th US Astronaut class, Jack Fischer was interviewed last month following his experience in the sim with fellow ISS colleagues Rex Walheim, Gregory Johnson and Scott Tingle. In Langley’s Cockpit Motion Facility, trainees are able to approach and land the lifting-body spacecraft at the Edward’s Air Force Base simulated site. The trainer features a realistic high altitude final descent after re-entry in a variety of atmospheric conditions. The feedback on Dream Chaser by current astronaut Jack Fischer has been positive. “It really is impressive how good it flies…with small improvements I think it’s going to fly even better”.

Langley personnel have been developing laws governing the flight controls for the simulator, combining research data from wind tunnel analysis and expert engineering. Senior aerospace technologist Bruce Jackson explains the center’s plan to continue work on the craft’s re-entry dynamics, “gradually expanding the envelope of our control system to handle higher altitude, higher speeds, all the way to landing”. Jackson expects an update to the simulation later this year which will include a Mach 1 approach at just under 10 km altitude, and a full runway rollout. Astronauts will be at the top of the invitation list to try out the new software.

Dream Chaser is a 7 person fully reusable spacecraft designed with crew safety and comfort in mind. John Martin, Langley technical lead on commercial space activity, expects the real Dream Chaser to be operational in 2017, riding on the United Launch Alliance Atlas V into low earth orbit. The vehicle arrived last month at NASA’s Dryden Flight Research Center to begin flight tests. Stressing the importance of safety in support of simulation training for astronauts, Fischer explains the logistics of landing the glider-like craft. “You’ve got to make it work the first time because you can’t power up and go around and try again”.

Below, the Dream Chaser simulator: