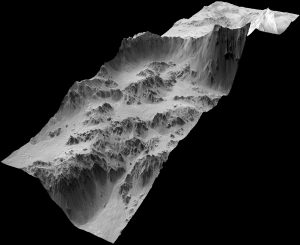 Digital Terrain Model of Mojave Crater, created from HiRISE data. This is similar to the process that will be used in game (Credits: NASA/JPL/University of Arizona/USGS).

We love crowdfunded space projects here at SSM, and this month has seen a couple of new projects doing the rounds.

First was the pocket spacecraft project, which seeks to raise over a quarter of a million dollars in order to send a fleet of coin sized spacecraft to the moon, and now the indie software developer Random Seed has launched a 1st person Martian mystery video game on the Kickstarter website.

Using graphics derived from the HiRISE instrument on board NASA’s Mars Reconnaissance Orbiter, and combined with real life risks such as low oxygen supply, dehydration and other metabolic hazards, Lacuna Passage promises to provide a Martian exploration experience like no other.

The game tells the story of protagonist Jessica Rainer, an astronaut sent to Mars with her crew to investigate the disappearance of the first manned mission’s crew. En route, an accident forces Jessica and her crew into a crash landing. The player must then investigate the crash site and surrounding 25 mile area, searching for clues as to what happened to the first crew whilst struggling for survival on the unforgiving Red Planet.

If the campaign goes well, Random Seed have stated that they will be looking at integration with the upcoming Oculus Rift head mounted display system, which would add a whole new dimension to the immersive experience.

Below, an early look at the game in its pre-alpha state:

*Disclaimer: In the spirit of transparency, the author of this article would like to declare that he is involved in the development of this game, albeit in a minor role, as a consultant…but let’s be honest, who doesn’t want to explore Mars with a Virtual Reality headset? Exactly. Click that link, folks!