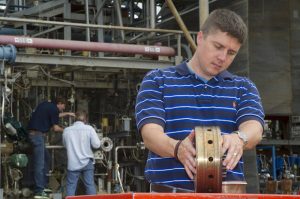 Engineers at NASA’s Marshall Space Flight Center have posted a video showing the successful test firing of a rocket engine using a 3D printed fuel injector: the largest single 3D printed item ever used in such a test.

NASA hopes that in future, 3D printed rocket components could reduce manufacture costs by up to 70% compared to traditional manufacturing methods. The savings will result largely from the reduced tooling requirements allowed by additional manufacturing. Additionally, the 3D printed injector has been reduced in complexity from 115 parts down to just 2. The reduction in complexity also equals a massive cost saving, and theoretically increases part reliability due to the reduced potential failure points in the part.

This successful test of a 3D printed rocket injector brings NASA significantly closer to proving this innovative technology can be used to reduce the cost of flight hardware,”

The printing process was based on a technique known as Selective Laser Sintering, which fuses small particles of nickel-chromium powder together forming a larger structural piece.

The test was completed on August 22nd, and the engine reached nearly 90,000 Newtons of thrust, which is ten times the amount of thrust generated using previous 3D printed injectors.

Marshall Space Flight Center is no stranger to additive manufacturing, having recently completed a series of tests on a 3D printer due to be sent to the International Space Station next year. The space-borne 3D printer is being developed by California based company Made In Space.

Below; the motor undergoes a test firing.