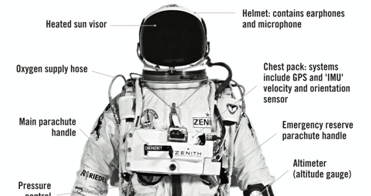 On October 14th, Felix Baumgartner successfully became the first human being to break the sound barrier…without an aircraft.

The incredible feat of engineering and human endurance was the focus of the Red Bull Stratos project, which had aimed to break several records for skydiving which had been set by Colonel Joseph Kittinger in 1961.

At approximately 18:08 UTC, over Roswell, New Mexico, Baumgartner exited his gondola at an altitude of 39,045m, made a salute, and uttered the following pronouncement:

“I know the whole world is watching now. I wish you could see what I can see. Sometimes you have to be up really high to understand how small you are… I’m coming home now.”

He then jumped off the gondola’s step, and into the history books. 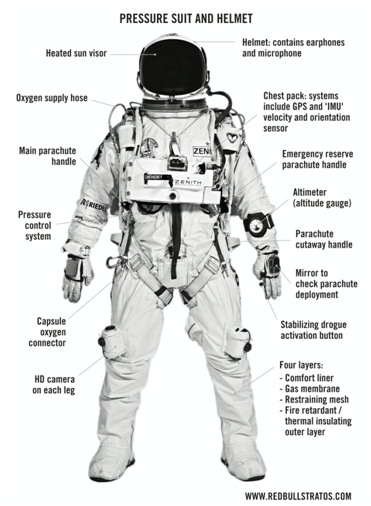 The records set by Kittinger’s jump include world’s highest freefall, world’s fastest freefall, and world’s longest freefall. Kittinger jumped from an altitude of 102,000 feet (31,089.6 m) and reached a velocity of 988 km per hour before the atmosphere slowed his descent. With 99% of the Earth’s atmosphere beneath him, the usual skydiving constraint of terminal velocity wasn’t an immediate concern.

However, Red Bull Stratos was not merely an extreme sports spectacle. There was a strong research element to the project as well, particularly in the testing and validation of the full pressure suit which was designed by the David Clarke company to keep Baumgartner alive during his ascent and descent.

The effects of high altitude and near vacuum on human physiology are well documented; At 18,900–19,350 meters, the point known as “Armstrong’s Line,” the pressure experienced is enough to make fluids within the body boil at 37 °C, the temperature of the human body.

At mid altitudes, the air density is so low, that normal breathing reflexes are not possible, so “pressure breathing” is utilized. This technique is required when oxygen is supplied directly to an individual at a pressure higher than the ambient barometric pressure. It involves forcing air into the lungs with a regulator, and also forcing the air out of the lungs by use of mechanical bladders positioned within the pressure suit. These are the operating principles of a “partial pressure” suit. However, this technique is only optimal below 13,106 m. Above this altitude, a different system is needed. The David Clarke company has avoided the necessity of pressure breathing by using a “full pressure” suit design, in which the wearer of the suit is surrounded by a layer of air at an atmospheric pressure equivalent to an altitude of 10,668 m, which is equal to 0.24 bar.

Add to that the risk of hypoxia from lack of oxygen, and also the risk of freezing to death and the need for a pressure suit becomes apparent. To combat the hypoxia, the suit is equipped with enough oxygen to last for the duration of the descent. The suit is designed to operate within a temperature range of +38°C to -67°C, with added flame protection for the exterior.

As well as the environmental and physiological considerations, there were certain mechanical dynamic issues that had to be addressed, namely the issues of stability and heat management as Baumgartner entered the supersonic flight regime. However, the effects of supersonic speeds on a human being outside of a vehicle are completely unknown – or they were before Baumgartner’s trip.

One of the records set by Kittinger in 1961 was that of longest freefall with a drogue parachute, which was deployed to aid stability. The Red Bull Stratos team employed an automatic drogue as a backup in case Baumgartner lost consciousness, but this was not deployed ultimately. Stability was an issue for Baumgartner, as he went into a spin as soon as he left the gondola. “The exit was perfect but then I started spinning slowly. I thought I’d just spin a few times and that would be that, but then I started to speed up,” stated Baumgartner. “It was really brutal at times. I thought for a few seconds that I’d lose consciousness. I didn’t feel a sonic boom because I was so busy just trying to stabilize myself.” This issue was not related to breaking the sound barrier however, and was attributed to the lack of atmosphere available for Felix to correct himself using normal drag and lift based “steering”. Once in the denser air, he was able to regain control.

The suit also contained a powered visor for eliminating condensation from breathing. Baumgartner reported that this system had become faulty, and he experienced fogging of the visor during his descent.

Below, the view from Baumgartner’s head cam as he pulled out of his initial spin: