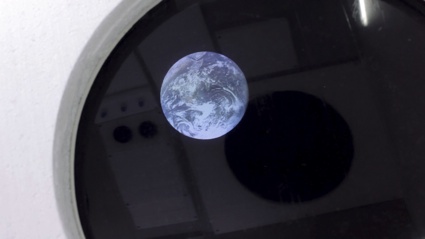 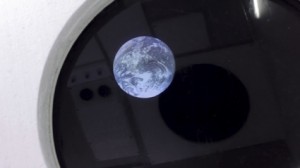 A view of Earth as seen by the receding astronaut on his one way journey (Credits: J. Popper).

Artist Joseph Popper whose exhibit One Way Ticket is featured at this year’s Design Interactions Show in the United Kingdom, was intrigued by the idea of explorers running out of places to explore. He asked himself what would it be like to have a last frontier extreme adventure: a single astronaut to take a one way trip into deep space with no prospect of return.

Popper approached the project with an eye on technical accuracy.  In his vision, a single person could pack enough supplies to survive for two years, becoming the first person to reach lower Mars orbit before travelling on as far as possible via a series of Hohmann transfers – likely about 90 million miles from Earth.

In an interview with We Make Money Not Art, Popper explained: “We can find many examples in space mission analogues that simulate certain aspects of a one-way voyage. However what struck me most is that, as we are talking about something completely unprecedented, we can only ever really speculate on what such a voyage would be like until someone actually goes.”

In addition to the physical exhibit, Popper make a short film simulating the messages sent back from the lone astronaut to Earth, documenting his Voyager-like journey into deep space. Here is that video: