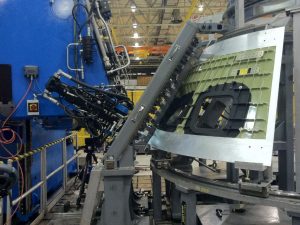 First weld for the Multi-Purpose Crew Module at the Michoud Assembly Facility on September 9, 2011 (Credits: NASA).

NASA has officially began the construction of the first Orion Multi Purpose Crew Vehicle (MPCV) on September 9, 2011, in the Michoud Assembly Facility. The capsule, first human spacecraft developed by NASA since the Space Shuttle, underwent the first phases of manufacturing, using an innovative new friction stir welding process, developed especially for Orion construction. According to NASA, the process creates a seamless, leak-proof bond that has proven stronger and higher in quality than can be achieved with conventional welding. If all goes well, the capsule may fly unmanned as early as July 2013, on top of a Delta IV.

NASA and Lockheed Martins have already built several mock-ups and test versions of Orion for ground testing, as well as for splashdown and emergency escape system. The Orion capsule was originally developed under the now defunct Constellation program, which was planning to bring astronauts back to the Moon by 2020. NASA received presidential mandate to continue the development of Orion as Multi Purpose Crew Vehicle (MPCV), a spacecraft designed for human deep space exploration, targeting an asteroid mission by 2025, followed by a mission to Mars by mid 2035. “We’re not only working to send people into deep space,” said David Weaver, NASA spokesman, “we are putting people to work right here in America.” After welding, the capsule will be sent to NASA Kennedy Space Center in Florida, where it will be equipped with the heat shield.