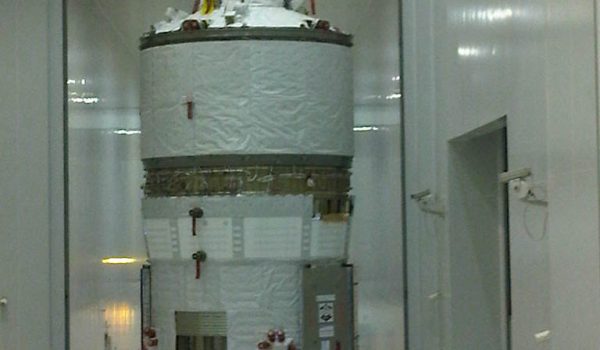 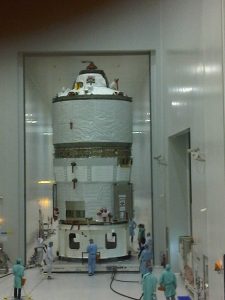 ATV transfered on a giant skid to the S5B preparation zone in Kourou (Credits: ESA).

“After fueling has finished (towards end of April) ATV-4 will depart for the ‘Batiment Assemblage Finale’ for the final stage of preparation,” said ATV Operations Interface Manager and Launch Campaign Manager Charlotte Beskow in a blog entry. “ATV carries several tons of propellant for its own needs” and also “fuel for the Russian segment of the International Space Station”

ATV-4, named after Albert Einstein, is being processed in the Kourou spaceport’s S5 payload preparation building. Within the S5 building, it was moved through internal corridors – under clean-room conditions using an air cushion pallet – from the S5C large preparation hall into the S5B high-bay area, on March 28

The ATV series have been developed by ESA to resupply the International Space Station with propellant, water, air, payloads, and experiments. It is also used to modify ISS’ attitude and altitude to avoid collisions and counteract drag. Previous ATVs were named after Italian physicist Edoardo Amaldi, German astronomer Johannes Kepler, and French novelist Jules Verne. They were launched respectively in 2012, 2011, and 2008.  The 20 metric ton  Albert Einsten, produced by EADS Astrium in Bremen, will carry some 6,270 kg of fuel, water, air, oxygen, and dry cargo to the space station. In particular, 860 kg of fuel for the Russian module’s engines, 570 kg of water for the crew, 99 kg of air and Oxygen, 2,235 kg of fuel for maintaining ISS orbit and for re-boosting it, and another 2,506 kg of dry cargo.

Initially planned for April 2013, the ATV-4 launch had to be delayed because of a glitch in an avionics box.  Following its final preparations, the vessel will be transfer to the CGS launcher integration building, where the spacecraft will be place atop Ariane 5. ATV-5, the last of the series, named after Belgian physicist George Lemaître, is scheduled for early 2014.

Below, ATV-3 docks with ISS: