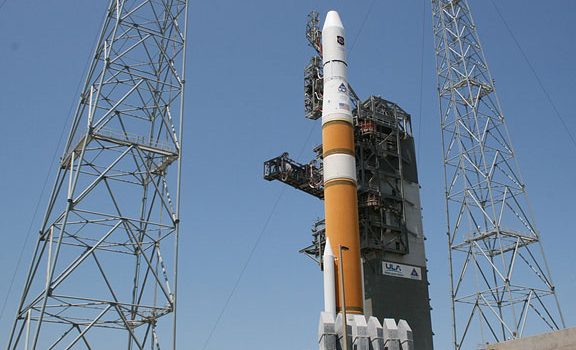 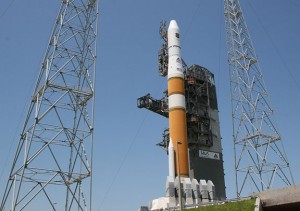 Delta 4 rocket is set to launch on May 23 from Space Launch Complex 37 at Cape Canaveral (Credits: Ken Kremer).

United Launch Alliance’s (ULA) Delta 4 rocket carrying a military communications satellite is ready to lift off from Cape Canaveral, on May 23. The launch will mark the return to operations for Delta 4, which has remained idle since last October after it suffered a low-thrust condition on its upper stage. The rocket received the clearance for flight although the seven-month investigation into the root cause of the mishap has not yet been closed.

“Given the comprehensive investigation that included extensive analyses and engine testing, along with the mitigating actions that have been implemented,” said Jim Sponnick, ULA vice president of mission operations, “we have concluded that the risks have been mitigated and that it is safe to proceed with the WGS 5 launch.”

During the previous launch on October 4, while the rocket was set to reach the orbit carrying the GPS 2F-3 navigation satellite, the RL10B-2 engine, fueled with liquid hydrogen and liquid oxygen, suffered a low-thrust condition. A small fuel leak started as the upper stage’s engine was ignited, decreasing the expected thrust leaving launch officials wondering if the rocket would have enough fuel to reach the correct orbit. The investigation located the leak above the narrow throat portion of the thrust chamber. The upper stage had to burn longer to compensate, but it managed to deliver the GPS satellite into its orbit at an altitude of 20,200 km, helped by Delta 4’s high fuel margins and relatively light weight of the GPS satellite.

The inquiry is still open, but the U.S. Air Force and ULA gave the flight clearance for the engine to fly the $342 million Wideband Global SATCOM 5 satellite built by Boeing. The spacecraft will grant communications to military forces and civilian leaders.

The launch was initially scheduled for May 22, but it has been postponed until the day after, to replace a control box on the RS-58 main engine.