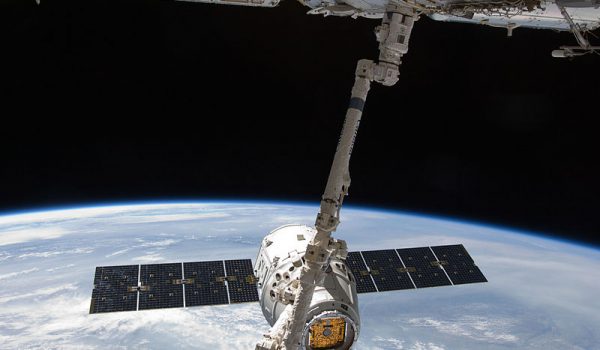 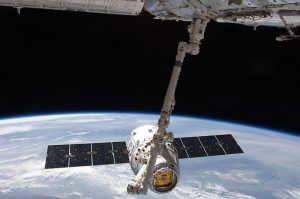 SpaceX’s Dragon spacecraft and Candarm2, the robotic arm that will detach the capsule from the ISS (Credits: NASA).

The SpaceX Dragon space capsule is scheduled to return to Earth on March 26, after docking at the International Space Station (ISS) for more than three weeks.

“The actual removal of Dragon from the space station begins at 4:05 a.m. [EDT], with release scheduled for 6:56 a.m. Dragon will conduct a series of engine burns to take it away from the space station with the third and final departure burn taking place around 7:06 a.m.” said NASA in a station status release on March 22.

The commercial supply ship was set to return on Earth on March 25, but the operation had to be postponed because of bad weather near its splashdown site in the Pacific Ocean.  Initially ground controllers will undock Dragon using the Canadarm2, then the spacecraft will fire its engines for the last time to reenter Earth’s atmosphere for a final splashdown at about 395 km off the coast of the Baja California peninsula.

According to NASA, the extra day in space will not affect the 1225 kg of equipment and science samples that the vessel is about to bring back to Earth. Dragon arrived at the ISS on March 3, with a 1000 kg load of fresh food, clothes, seeds of a flowering weed used for research, mouse stem cells, trash bags, computer equipment, air purifiers, spacewalking tools, and batteries.  The capsule had a problem after its launch from Cape Canaveral, when the thrusters were not working properly. It took several hours before the flight controllers could regain control of the spacecraft and dock Dragon to ISS.

SpaceX’s capsule will return to Earth two days before the scheduled launch of three new crew members to the space station, on March 28.  Chris Cassidy, Pavel Vinogradov, and Alexander Misurkin will be launched aboard a Russian Soyuz on a six-hour flight to the ISS.  Vinogradov is supposed to become the next mission commander when the current crew, composed of Canadian Chris Hadfield, American Tom Marshburn, and Russian Roman Romanenko, depart for home in May.