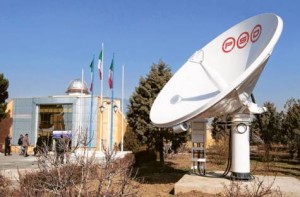 A view of the Alborz Space Center west of Tehran (Credits: Reuters).

In a move designed to showcase domestic technology capabilities and demonstrate tranparency, Iran opened its Alborz Space Center to journalists for the first time on February 29. 50 journalists participated in the tour of the facility, located 60 km west of Tehran. The event comes at a time when Iranian relations with western countries are frayed over Iran’s refusal to allow U.N. inspectors sufficient access to Iran’s nuclear facilities. With Iran’s launch of the Earth observation satellite Navid on February 3, the west has voiced growing concerns over potential militarization of Iran’s space assets, according to the Associated Press. Iran seems to be interested in nipping that concern in the bud – as well as showing off their homegrown technologies. “We needed various equipment, including sun sensors, for Navid. We could not buy them because of sanctions. So we designed and produced sun sensors ourselves,” said project director Mojtaba Saradeghi. “We are the control station for Navid satellite, which has been designed to take pictures from the earth’s orbit,” said Saradeghi. Kamal Yazdani, another official at the site, said experts here monitor Terra, a multinational NASA scientific research satellite, and other satellites available to the international scientific community. “We receive data from these satellites and provide the pictures to research and scientific centers including student projects,” he said. Iran has plans to launch additional Earth observation satellites, as well as security satellites. Iran’s space program has a goal of launching a manned mission by 2021. The video below is the Iranian state television’s report of the 2009 Ovid satellite launch: