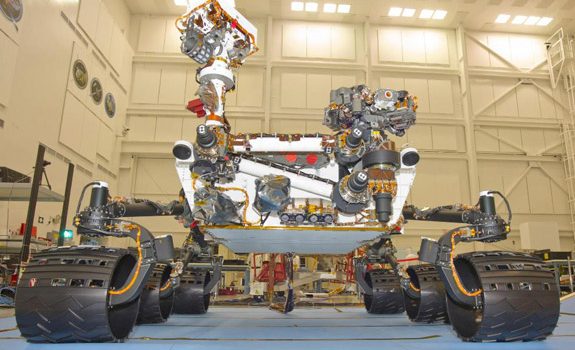 NASA’s most advanced mobile robotic laboratory is now in final preparations and will launch from Cape Canaveral on Nov. 25.

“MSL has been assembled, tested, encapsulated, placed atop an ATLAS rocket and is ready to go,” said Doug McCuistion, director of NASA’s Mars Program during an official briefing in Washington a few days ago.  “This mission advances technologies and science that will move us toward missions to return samples from, and eventually send humans to, Mars.” 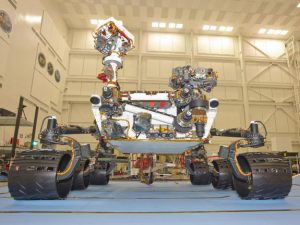 The rover, named Curiosity, will investigate the possibility of life on the Red Planet. It will search for organic chemistry and determine if its landing site, the Gale crater, could have ever had water. The 100-mile-wide Gale crater is composed of layered rock, with the bottom layers made of clays and sulfates, and upper layers containing Martian dust.

Launching on a United Launch Alliance Atlas 5 rocket from Florida’s Space Coast on the day after Thanksgiving (Nov. 25), Curiosity is twice as long and five times as massive as Mars rovers Spirit and Opportunity, with a mass of 1 ton. The rover will carry a set of 10 science instruments massing 15 times as much as previous missions’ science payloads. Curiosity also has a 2-meter arm that can place sensors on Martian rocks to examine their chemical composition. More specifically, it will have the ability to drill inside rocks and deliver samples back to the laboratory instruments inside the rover, a breakthrough in Mars exploration.

In response to a problem experienced by the Spirit and Opportunity rovers, Curiosity will be powered via a  nuclear radioisotope power generator (RPG). This energy source will circumvent power loss due to dust settling on solar panels, as occurred with the previous rovers. RPG technology has been used to power deep space missions for more than 40 years. According to NASA, the chances of a launch accident occurring are 3.3% with the likelihood of an accident releasing radioactive plutonium closer to 0.3%.

After the November launch, MSL will cruise for more than eight months to Mars, where it will descend to the surface in August 2012, using an elaborate landing system, since Curiosity is far too heavy to use an air-bag touchdown. It will enter the Martian atmosphere at more than 1,500 km per hour, parachute to the ground, fire rockets to slow its descent and then hover 200 meters above the ground before lowering the rover down on a crane-like mechanism.

Curiosity will explore the Martian surface for at least two years and according to NASA scientists will provide the most valuable data ever obtained about the neighboring planet. No mission to Mars since Viking in the 1970s has directly aimed to answer the question of whether life has existed on the Red Planet.

The Curiosity launch follows closely the launch of the Roscosmos Phobos-Grunt probe, intended to collect surface samples from Mars moon Phobos. The Phobos-Grunt is currently in a degrading orbit following a failed booster firing that trapped it in Earth orbit. The probe is expected to reenter Earth atmosphere sometime in January.

In the video below, Deputy Project Scientist Ashwin Vasavada of the Mars Science Laboratory compares Curiosity with previous Mars probes Spirit and Opportunity.