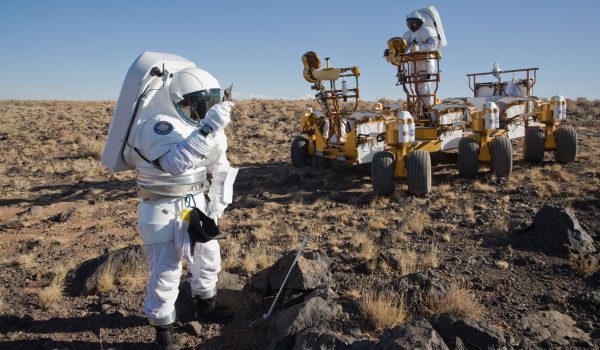 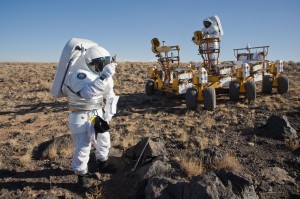 An astroanut and geologist test a wheeled SEV in a 2008 Desert RATS study. (Credits: NASA).

For three days this week, a small part of NASA’s Johnson Space Center in Houston will simulate a human mission to an asteroid.

As NASA continues plans to send humans to explore asteroids and other destinations beyond low-Earth orbit, a number of questions are being asked about how astronauts could live and work in space. NASA astronaut Mike Gernhardt and geologist Brent Garry of the Planetary Science Institute in Tucson, Ariz., will spend three days and two nights living inside the cabin of a prototype multi-mission Space Exploration Vehicle (SEV) answering some of those questions.

Normally, the cabin of the SEV prototype is used atop a wheeled chassis, but wheels are of no use in the microgravity environment of an asteroid. Instead, the cabin would be used on a propelled sled allowing crew members to maneuver around the asteroid.

To simulate such an environment, the SEV will be on an air-bearing floor allowing it to virtually float, much like an air hockey puck. The crew will see how the SEV handles in a simulated microgravity environment.

The tests are part of NASA’s Research and Technology Studies (RATS) program that will evaluate and provide data for future generations of SEV cabins. The test will be repeated in January with a different crew. Both tests will be used to develop a fully integrated RATS test at Johnson in August.

This series of tests and will be used to evaluate existing tools that could be used to simulate spacewalks on an asteroid. The only time the crew will leave the SEV during the tests will be to perform simulated spacewalks. Test equipment and laboratories include:

— Johnson’s virtual reality laboratory, also used to train astronauts for both space shuttle and International Space Station spacewalks
— A chair with thrusters previously used for testing the Manned Maneuvering Unit, a jet pack designed to allow astronauts to perform untethered spacewalks
— The Active Response Gravity Offload System, or ARGOS, a system that suspends astronauts in spacesuits from a beam and simulated different amounts of gravity. During the media event, a crew member will conduct a simulated spacewalk using ARGOS

The video below reviews the preparation that goes into a Desert RATS analog mission.