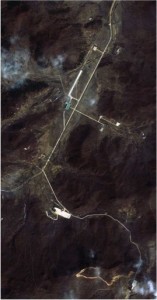 North Korea is planning a rocket launch on 14-16 April, to commemorate the birthday of the nation’s founder. This is North Korea’s third attempt to launch a rocket since 1998.

Satellite images of Tongchang-dong Space Launch Center show that North Korea is making all the preparations consistent with a mid April launch. The images show that North Korea “has undertaken more extensive preparations for its planned April rocket launch than previously understood,” according to the U.S.-Korea Institute at Johns Hopkins School of Advanced International Studies.

According to 38 North, a website devoted to analysis of North Korea, “A March 28 satellite picture of the entire site appears to show a trailer with a dish antenna -probably a radar tracking system – mounted on top of a ridge mid-way between the launch pad and the rocket engine test stand.”

There is international concern regarding the rocket launch, in that it may be used as a test missile for nuclear weapons. According to the Associated Press, analysts are of the opinion that: “North Korea has conducted two nuclear tests, but we don’t believe they have mastered the technology needed to shrink a nuclear weapon and mount it onto a missile yet.”

On Feb 29 an accord between North Korea and United States was reached, establishing that the U.S. will provide North Korea with food aid in exchange for stopping any kind of missile and nuclear testing. If the rocket, called Unha-3, launch takes place as predicted, the accord will be ended.

The Tongchang-dong Space Launch Center is located about 55 kilometers away from North Korea’s  border with the Chinese city of Dandong. North Korea has established that the rocket’s flight path has no potential to drop debris on  other countries. Nevertheless, Japan’s minister of defense has ordered full attention on the possibility that rocket debris  will hit Japan’s territory; the order is to have missile units targeting the rocket just in case some portion of it may need to be intercepted.

According to South Korean defense officials, the 3 stage rocket main body was already shipped and transported to a building in Tongchang-ri.  The rocket has 3 stages, is 105 feet long and carries a 100 kg payload