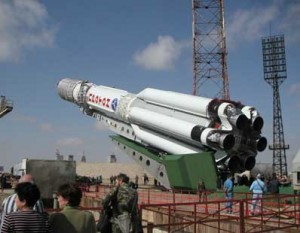 Proton rocket rolling out for launch. Commercial launches may be preceded by a demonstrator flight carrying a Russian satellite (Credits: ILS).

Russia will be able to launch no more than five Proton-M rockets from Baikonur Cosmodrome in Kazakhstan before the end of 2013. The launcher is supposed to resume operations in September, after conclusion of the investigation into the July 1 crash, involving a Proton-M carrying three Glonass satellites. The rocket deviated from its designated trajectory almost immediately after takeoff, exploding upon impact with the ground, close the launch pad.

“The number of launches is limited by the capacity of the station fueling Briz-M upper stages of Proton-M rockets. The station can fuel only one upper stage per month,” said a representative of the Baikonur Cosmodrome.

According to the source reported by Voice of Russia radio, with the first launch in early September and launch preparations beginning about one month in advance, it will be possible to fuel just five Briz-M upper stages. Therefore, with a rigorous timetable, Russia would be able to carry out four or five launches before the end of the year.

Currently, on the preliminary launch schedule there are five satellites and the Multipurpose Laboratory Module for International Space Station. The satellites’ queue is composed of SES’ Astra 2E, Space Systems/Loral’s Sirius FM-6, Russia’s Cosmos defense satellite, Express AM5, and Inmarsat 5 F1. These were all supposed to be launched between July 21 and the end of this year. Some of these satellites will inevitably be delayed until the next year due to the Proton-M crash.

Commercial clients may demand a demonstration flight before trusting their birds to be launched on the Proton-M, therefore the first flight of the cleared rocket could carry a Russian satellite. Either the Cosmos defense satellite or Express-AM5 are indicated as first to launch in September. The same procedure was followed after the failure of the Briz-M upper stage during the launch of Express-AM4, in August 2011. A Russian military satellite had to prove the reliability of the launch system in September of the same year before commercial clients were willing to trust the rocket once again.

If the ambitious launch schedule is successful, it will allow Russia to partially reacquire its clients’ confidence lost with the Proton-M crash.