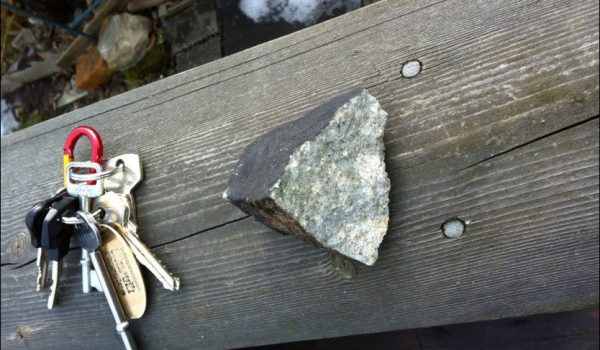 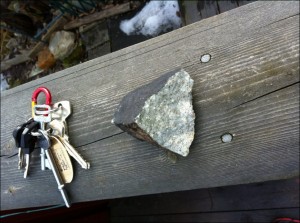 Rune Thomassen and his family were visiting their cabin near the urban holiday park “kolonihage” in Norway last weekend, and were surprised to find a hole in the roof. They were even more surprised to discover it had been caused by a 585-gram meteorite, sitting a few meters away.

After examining the cabin, Knut Jørgen Røed Ødegaard, an astrophysicist at the University of Oslo, remarked that “We took in hundreds of tips and have been searching for bits of meteorites, and then we find this right in Oslo! […] This is an incredible discovery, I can hardly believe it.”

While the odds of a meteorite of striking anywhere in a populated are already low, it is particularly unlikely in Norway, where only 14 meteorites have been discovered since 1848. Even more unbelievable is the fact that the meteorite is an especially-rare “breccia” meteorite, one that is composed of a number of smaller minerals. “This is unique. This is double-unique,” said Ødegaard.

Such meteorites, by virtue of their rarity, are also highly valued among private collectors. Meteorites containing ejected Mars dust have sold for as much as 670 Euros per gram. “This family is very lucky,” commented Serge Koutchmy, a researcher at the Paris Astrophysical Institute. “First off because the piece of meteorite did not cause much damage, but also because it is worth a small fortune.”