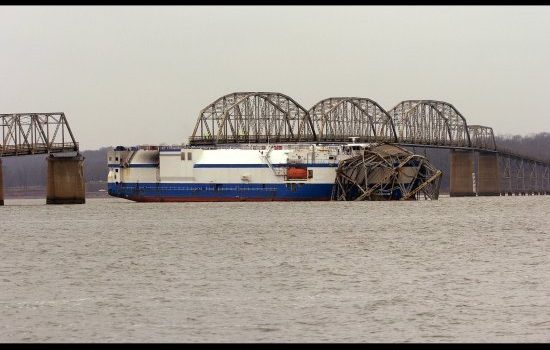 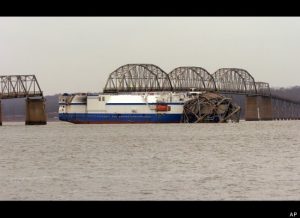 The Delta Mariner ran into Eggner's Ferry Bridge, taking out a full span of the bridge (Credits: Associated Press).

A cargo ship carrying an Atlas 5 first stage and Centaur upper stage that has been stranded in Kentucky for 10 days after running into a bridge has been cut out of the underwater debris and backed away from the bridge to allow debris clearance to begin.

“The salvage operations are proceeding as planned, and it is a significant milestone that the ship has now been relocated downriver and clear of the bridge,” Coast Guard Cmdr. Claudia Gelzer said in a statement.

The incident occurred on January 26 when the 5 story tall Delta Mariner cargo ship slammed into Eggner’s Ferry Bridge in Louisville, Kentucky. The impact destroyed a span of the bridge, spreading twisted steel and asphalt across the bridge and ship. Cars crossing the bridge at the time narrowly avoided driving off the bridge through the gap. The Delta Mariner regularly ships rocket components Alabama to Florida. The cause of the crash is still under investigation.

The rocket components were headed for Cape Canaveral for use by NASA and the US Department of Defense in upcoming satellite launches. United Lauch Alliance, the builder of the components, has indicated that no damage to the cargo was incurred and the shipload will ultimately continue its journey to Florida once the accident is straightened out. The parts will be used to launch the AEHF-2 military satellite communications system as well as an August NASA Radiation Belt Storm Probe mission to study the Van Allen belts.