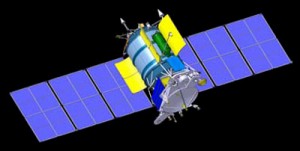 The military satellite Geo-IK-2, lost due to a Briz-KM malfunction on Februaru 1, 2011(Credits: ISS Reshetnev).

Roscosmos has confirmed that Russia’s Geo-IK-2 military geodesic satellite burnt up completely while re-entering the Earth’s atmosphere on July 15. Initially, media reported that the satellite crashed over the Qinghai province of China.

Roscosmos spokesperson Anna Vedishcheva told Ria Novosti that the satellite had entered the atmosphere around 6 pm Moscow time on July 15 and “ceased to exist,” having “burned up completely.”

North American Aerospace Defense Command (NORAD) has given information about the re-entry prediction since July 11. The prediction became more refined as the day of the re-entry approached. Anatoly Zak reported that around the predicted time of re-entry, the satellite was spotted over England. The object was changing its brightness, probably indicating a tumbling motion due to the friction of the atmosphere. The last NORAD prediction had an error of only 30 minutes from the time of re-entry reported by the Russian Center for the Control of Space.

The 1,400-kilogram spacecraft was designed to precisely locate military targets and monitor plate tectonics by measuring Earth’s shape and the properties of its gravitational field. The satellite was launched on a Rokot rocket with a Briz-KM upper stage from the Plesetsk Cosmodrome, on February 1, 2011. Although the first two stages of the rocket worked nominally, the Briz-KM stage failed to reignite after the first burn, meaning that it was unable to deliver the satellite into the prescribed orbit.  Geo-IK-2 remained inserted into the wrong elliptical transfer orbit with perigee and apogee at 370 and 1,000 kilometers respectively, instead of the required 1,000-kilometer circular orbit. Controllers were unable to make contact with the satellite after launch and communications were restored only after a few months. Russian engineers managed to reacquire flight control but the satellite, unable to fulfil its primary objective, was reassigned to the task of training personnel.

Recently, ISS Reshetnev representative confirmed that a replacement for Geo-IK-2 will be ready for launch in 2014, although all its electronic components are undergoing an update to withstand the radiation environment of required orbit, .