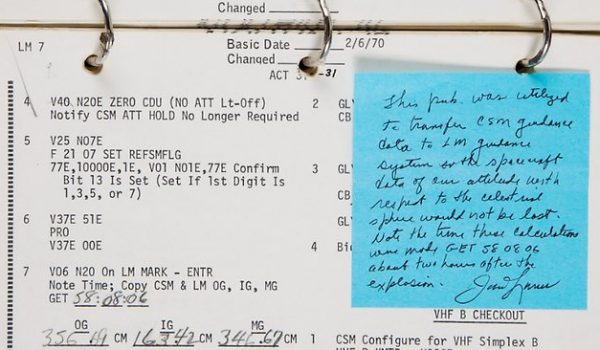 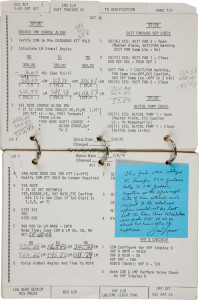 Sale of several space artifacts, including a checklist used in the Apollo 13 mission, has been halted in response to an ownership challenge from NASA.  Heritage Auctions is holding the items in question pending resolution of the challenge.

The checklist was used by Apollo 13 astronauts in devising a return trajectory for the crippled craft. It includes handwritten notes by Lovell and calculations on the spacecraft’s angle of descent. The checklist fetched $388,375 at the November 30 auction, the most for any space artifact that has not been to the moon.

In addition to the checklist, NASA has challenged the ownership of a lunar module identification place sold for $13,145 and a command module rotational hand controller sold for $22,705 from Apollo 9 astronaut Rusty Schweickart , and a glove used by Alan Shepard in training for command of the Apollo 14 missions sold for $19,120.

All the challenged items were donated by astronauts or friends of astronauts under the impression that they were the legal owners of the artifacts. The checklist was donated by Apollo 13 commander Jim Lovell who found it while cleaning out a bookshelf, according to Space.com.