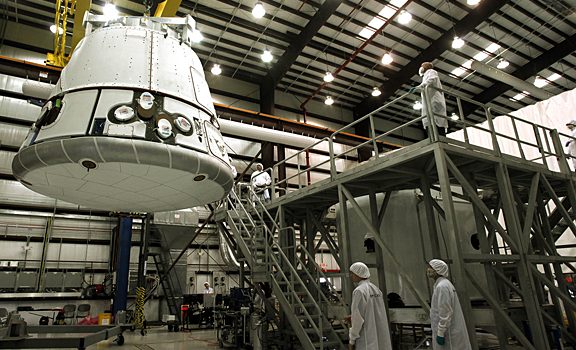 The SpaceX Dragon Capsule was mated with the trunk that will carry unpressurized cargo to the International Space Station (ISS) on November 16, completing an important step in its preparation. The Dragon Capsule is set to complete a demonstration flight to the ISS in early 2012 aboard a Falcon 9 rocket. 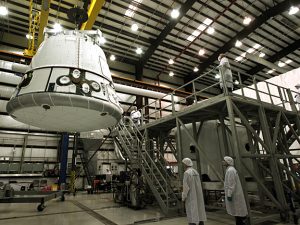 The SpaceX Dragon capsule being mated to the trunk (Credits: SpaceX/Mike Brown).

The mating of the capsule took place at its Launch Complex (Hangar 40) at Cape Canaveral Air Force Station in Florida. Technicians mated the Dragon to a trunk-like structure with solar arrays and thermal radiators, which also provides sufficient room for unpressurized cargo. During the Dragon capsule’s first trip to orbit in December 2010, which lasted just two laps around Earth before a successful re-entry, there were no solar arrays flown.  However the next flight, planned for early next year, will be much longer requiring a more advanced flight system to successfully take the unmanned Dragon to the ISS and dock at the station.

Dragon is a reusable spacecraft developed by SpaceX under NASA’s Commercial Orbital Transportation Services (COTS) program. The spacecraft is made up of a pressurized capsule and unpressurized trunk used for Earth to Low Earth Orbit (LEO) transport of both cargo and crew members, and it was initiated by SpaceX in 2005. SpaceX will now become the first U.S. commercial launch services company to successfully transport U.S. cargo to the ISS,  making it an important asset in the next-generation of U.S. manned space exploration projects. 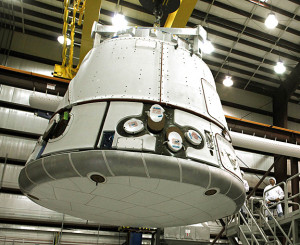 The success of the impending flight is a key milestone for operational cargo flights to the International Space Station. Under a $1.18 billion NASA contract, a minimum of 12 commercial cargo flights have been ordered from SpaceX, with an option to order additional missions up to a total contract value of $2.3 billion.

The video below shows a simulation of the Dragon launching and berthing to the ISS courtesy of SpaceX.