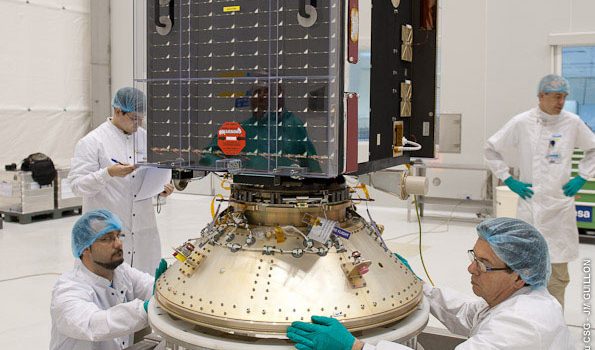 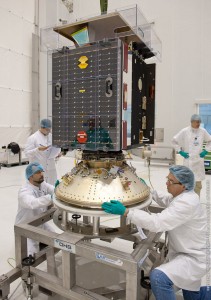 Proba-V ready to be integrated in the Vega’s upper stage. The launch will also include  VNREDSat-1 and the ESTCube-1 satellites (Credits: Arianespace).

European launcher Vega has been delivered to Arianespace, entering in the final preparation phase for the May 2 liftoff from the Guiana Space Centre.

“By using the same mission campaign procedures as proven for our workhorse Ariane, Vega has become a true member of Arianespace’s launcher family – joining Ariane 5 and Soyuz in side-by-side operations at the Spaceport,” said Arianespace Senior Vice President, Louis Laurent.

Vega’s prime contractor, Italian company ELV SpA, has performed the handover following a well-established preparation process flow that has already been utilized for years in Arianespace missions.  Arianespace will have now the responsibility for the payload integration, final launcher checkout, countdown, launch, and satellite deployment.

Vega’s upcoming launch is part of a program to demonstrate the launch system’s capabilities in orbiting small to medium sized satellites and it will be the first since the successful maiden flight that qualified the vehicle, in February 2012.  This new launch will carry 3 payloads: European Space Agency’s Proba-V, Vietnamese satellite VNREDSat-1, and Estonian student nanosallite, ESTCube-1.  The 120-kg VNREDSat-1 will be accommodated inside a dispenser called VESPA in the fairing’s lower position.  Inside VESPA will  also be located the 1.4-kg ESTCube-1.  The 160-kg Prova V will be placed atop VESPA, to be released first during the deployment sequence.

VNREDSat-1, built by Astrium for the Vietnam Academy of Science and Technology, is an optical observation satellite that will support climate change effects studies, improving Vietnam’s natural resource management and natural disasters’ prediction.  Proba-V, manufactured by QinetiQ Space Belgium, will operate in Sun-synchronous polar orbit and will monitor global vegetation growth with a newer version of a payload previously flown on the Spot series of Earth observation satellites. ESTCube-1’s main mission is to test a novel space propulsion technology based on the electric solar wind sail concept, with this 10 x 10 x 10-cm. mini platform carrying a deployable 10-meter-long tether to be unreeled in orbit and electrically charged.

Vega, developed by a consortium led by the Italian Space Agency, is a four-stage lightweight launcher.  The three lower stages are solid propellant stages, while the upper stage AVUM uses liquid bipropellant for primary maneuvering and cold gas thruster for attitude control.