According to James Oberg, former NASA spaceflight operations specialist and a leading interpreter of space exploration, the Shenzhou spacecraft is equipped with a docking system compatible with the International Docking System Standard (IDSS), the same standard in use on the ISS. During Oberg testimony at a Science, Technology, and Space Hearing titled “International Space Exploration Program” on April 27, 2004, he presented some details of the Chinese manned space program:

Although Russia and the U.S. have used different types of docking mechanisms over the years to link spacecraft in orbit, photographs of Shenzhou indicate that the Chinese have chosen a Russian variant called the APAS-89. The device consists of a pressurized tunnel 80 centimeters in diameter surrounded by sloping metal petals that allow any two units of the same design to latch together. Originally developed by a US-Soviet team in 1973-1975 for the Apollo-Soyuz Test Project and perfected for use by Buran space shuttles visiting the Russian Mir space station [which never happened, although one visiting Soyuz vehicle was equipped with the system], the APAS-89 is now used to dock NASA’s space shuttles to the International Space Station (ISS). Although China is primarily interested in docking its spacecraft with its own small space stations, the decision to employ the APAS-89 mechanism would allow Shenzhou to link with both the space shuttles and the ISS. 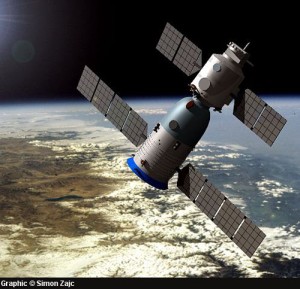 Artist’s conception of the Shenzhou spacecraft in Earth’s orbit

It is not a secret that the Chinese human rated space hardware, which capitalizes over 40 years of pre-existing accomplishments of US and Russia, is based on technology acquired trough Russia after a cooperation agreement signed in 1996. Yet, the Shenzhou spacecraft presents major differences from the Soyuz:

Its Service Module, for example, has four main engines, whereas Apollo’s service module had only one, and Soyuz has one main and one backup engine. Also, Shenzhou’s large solar arrays generate several times more electrical power than the Russian system. And unlike Soyuz, the Chinese orbital module carries its own solar panels and independent flight control system, allowing it to continue as a free-flying unmanned mini-laboratory long after the reentry module has brought the crew back to Earth. […] So despite superficial resemblances and widespread news media allegations, the Shenzhou is in no way merely a copy of the Russian Soyuz – nor is it entirely independent of Russia’s experience or American experience.

The Chinese human space program is in great part still shrouded in secrecy. The International Docking System, on the other hand, is an open and well documented standard: ” The International Community involved in the development of this standard encourages governments and private companies to develop their own implementations of this standard,” reads the ISD website, “This will increase competition and decrease the cost of entry to commercial providers.”

So in principle, the Shienzhou can dock to the ISS, and hopefully one day it will, opening a new chapter of international cooperation. Yet, China has first to achieve mastery over rendezvous and docking, as it is planning to do with the Tiangong-1 space station module. Secondly, a rendezvous and dock with the ISS would need to be approved by the safety panels of the ISS partners, a process that could take several months, as is is happening with SpaceX Dragon, whose plan to dock to the ISS is still awaiting for approval.

The docking system of the Chinese spacecraft, which can be seen in the video below, shows clear resemblance with the  International Docking System Standard.