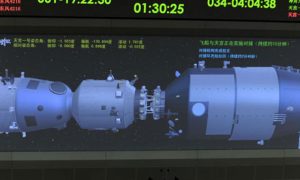 An animation of the Tiangong-1 module and Shenzhou-8 spacecraft as they dock is shown on a monitor at the mission’s Beijing control center. (Credits: AP/Xinhua)

China’s Shenzhou-8 successfully executed a docking procedure with the Tiangong-1 space lab module on November 4. “Within only seven or eight years, China’s space experts have completed what their foreign counterparts took three to four decades to achieve,” said Wang Yongzhi, the chief designer of the Shenzhou-5 and -6 spacecraft. Wu Ping, spokesperson for China Manned Space Engineering (CMSE) described the achievement at as “a historic breakthrough for our country and a huge technical leap forward.”

China is only the third nation to develop orbital docking capabilities, following the United States and Russia. China has reported particular pride in having developed this capability independently. According to the New York Times, however, some scientists are questioning whether CMSE did develop this technology on their own, or whether the development indicates a failure of the sanctions placed by western countries on Chinese technology sharing. The Shenzhou spacecraft itself is based on the Russian Soyuz. At a time when the United States is reviewing restrictive ITAR (International Traffic in Arms Regulation) rules, the question could be key to future international collaborations and security interests.

According to Shanghai Securities News reports, China is slated to spend 47 billion dollars over the coming years building a fleet of 10-20 spaceships and a space station. According to Encyclopedia Astronautica, China identified space infrastructure as a strategic interest in 1991 after years of sporadic developments. In 1992 Chinese authorities developed a 3 step program. The first step incorporated 2 unmanned launches culminating in the first Chinese manned spaceflight. This flight occurred in 2003, when Yang Liwei – the first taikonaut – flew aboard Shenzhou-5. The second phase involved technology-proving missions, including rendezvous and docking operations such as the one that was conducted with Shenzhou-8 and is slated for Shenzhou 9 and 10, with at least one involving a crew. For the third stage of development, China has set the goal of launching a manned space station by 2020, when the International Space Station is scheduled to be decommissioned.

Shenzhou-8 is host to 17 life-science experiment projects, including 6 German projects and one jointly developed Chinese-German project.  The scientific cooperation is taking place between CMSE and ASTRIUM/Kayser Italia under a DLR contract. The space lab module Tiangong-1 with which Shenzhou-8 docked is also carrying scientific experiments in the fields of remote sensing, space materials, and space environment.

The video below shows footage from the missions Shenzhou-1 through Shenzhou-8.