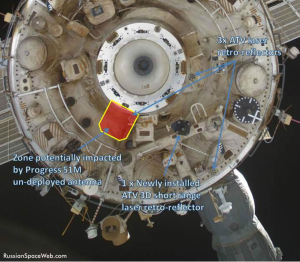 View of the docking port on the Zvezda module marking the area potentially impacted by Progress M-19M in April 2013 (Credits: Roscosmos/Anatoly Zak/Russianspaceweb.com).

While the fourth European ATV has been sitting on top of an Ariane 5 launcher set for launch to the International Space Station (ISS) on June 5, engineers are still analyzing a potential problem with a Laser Radar Reflector (LRR) which allows ATV’s autonomous approach to the station. On April 26, Progress M-19M cargo docked at the ISS with one of its KURS rendezvous antennas folded, due to a failure in the deployment mechanism. One out of three LRR mounted around the Zvezda’s aft docking port happened to be in the way of the undeployed antenna. No strange noises or problems were reported, but concerns were expressed on possible damage to the delicate optical sensor.

European Space Agency has not released information about the possible issue or the solutions proposed to verify the damage. However, NASA spokesman Josh Byerly told Space News that the Progress’ stowed antenna that may have caused the damage is folded up toward the lip of the docking ring, in the vicinity of the ATV’s navigation aids.

Engineers were not able to assess the potential damage because the area where the reflector is located is not visible from inside the station. Only external cameras of departing vehicles could visually assess the area. Alternatively, the spacewalk from the Russian segment, now scheduled for June 22, could be moved to an earlier date to inspect and repair or replace the device accordingly. Another reflector located in a different position was replaced due to deterioration on April 19, during the Russian spacewalk performed by cosmonauts Romanenko and Vinogradov, now the new station commander. However, according to Anatoly Zak of Russianspaceweb.com, in case of damage to the mounting bracket of the reflector, it has yet to be determined whether or not it would be possible to replace the device. In the worst case scenario, ATV carries a backup docking system using telegoniometers that emit laser light at a different wavelength.

The first inspection opportunity was on May 13, when a Soyuz capsule returned Chris Hadfield, Tom Marshbur,n and cosmonaut Roman Romanenko back to Earth. However, there were no stops during the undocking operations from the space station to inspect where the Progress cargo is docked to the Zvezda module. Most likely, the inspection will be conducted using the Progress M-19M camera, when the cargo ship will depart from the station to leave the aft port on Zvezda module clear for ATV-4’s arrival. Although it is still to be confirmed, it is likely that the next crewed Soyuz set to launch on May 28 would be used to fly a replacement of the device.