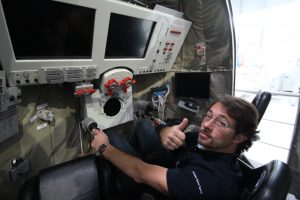 Every space enthusiast dreams of having a chance to go into orbit on a space mission. Besides the excitement of the launch, the exhilarating experience of floating free in microgravity and the stunning view, the chance to “test drive” a real spacecraft during on-orbit operations is a once in a lifetime opportunity that many dream of. Iacopo Baroncini, known as Spacedroider by his fans, has designed and developed Soyuz Simulator, an affordable mobile application to train aspiring cosmonauts to dock a Soyuz to the International Space Station (ISS). And we are not talking about an ordinary cell phone game: the app has been complimented for its realism by astronauts and cosmonauts who tried it. Space Safety Magazine had a chance to meet Baroncini and learn about his app, how he came up with the idea to develop it, and what he plans for the future.

Training as an Astronaut in Cologne

Baroncini is an eclectic and creative engineer from Livorno, Italy. Space was not his original dream: “I studied computer engineering at the University of Pisa and worked at Scuola Superiore di Perfezionamento Sant’Anna in its facility for robotic sciences for a few months,” he explains. Then, in 1997, he joined the ESA Young Graduate Trainee program as ground segment software engineer. “When I started as a trainee, I didn’t know that space would be so important for me,” he says. Baroncini describes his first approach to the space world as “like when you meet the woman of your life. Without any plan in mind, you suddenly fall in love with her.” Today he works as a project manager in the Strategic Planning and Outreach Office of ESA’s Directorate of Human Spaceflight and Operations. During one of his trips to the European Astronaut Centre in Cologne, he fulfilled a dream shared by many space enthusiasts: “I had the opportunity to experience basic astronaut training and to test their simulator for manual Soyuz docking to ISS.” 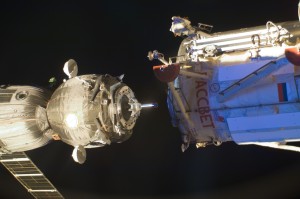 A Soyuz docking to the Rassvet module on ISS (Credits: NASA).

He was impressed by Soyuz’s functional, yet vintage, design from the sixties, and he took inspiration from the contrast between modern touch screen reality and the old and bulky Soyuz systems that could nevertheless maneuver a capsule in outer space with an accuracy of centimeters. “Today there are digital components, but some elements such as the control knobs, have not changed at all,” he explains. “They really look like old sink knobs from the beginning of the 20th century that you can move as joysticks. They are made for astronauts’ heavy gloves that do not allow nimble movements.” Baroncini came up with an idea to share his unique experience with everybody: “I developed the idea of an application that could simulate the Soyuz docking system without trivialization.” There are no similar applications on the market, Baroncini noted: “There are flight simulations apps, which are sold to a large range of prices, but nothing to dock a Soyuz to the ISS.” So he got to work on the idea.

Baroncini immediately opted for the Android platform that he appreciates for its open source nature, for the use of the Java language and for the availability of the OpenGL 3D library. “I also considered doing the same for iPhone but because I had limited time I never followed through,” he adds. “I designed a simple 3D model of the ISS and performed all the math to calculate orbital mechanics.”

Baroncini wanted a 3D model that could be both accurate from the point of view of simulation and simple from the point of view of rendering. Such compromise allowed him to recreate the docking experience without overloading the limited resources of the tablet system, “otherwise the user would have a lousy view,” he explains. The app simulates docking scenarios to the aft port of Zvezda, to the zenith port of Poisk, and to the nadir ports of Pirs and Rassvet. The virtual knobs on the touch screen enable the user to control the attitude and trajectory of the spacecraft with respect to the docking target. The user can select from two different points of view: Soyuz’s periscope view and virtual camera. Movements and speed of rotation “were the fruit of empirical estimation based on the simulator at Cologne and docking videos,” says Baroncini. 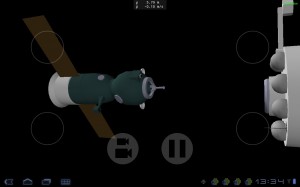 Before using the application, the user must read an introduction document that explains how the application works and how the Soyuz moves. When this phase is concluded, the user can decide whether to buy the application or not. The cost is €2.75, a reasonable price for a space adventure. “My idea was not meant for commercial use, but for fun and education,” says Baroncini. “In these cases, a few cents could really change the sorts of the application on the market. I just wanted some recompense for the tools I used to develop the application and the time I spent.”

The promotional video for the app is, as Baroncini describes it, “made from nothing: my creativity has helped me to develop audio and video content.” Baroncini enjoyed the whole process. “It took me 5 months, about 6 hours per week. I met some astronauts during a conference: Paolo Nespoli, Samantha Cristoforetti and Sergei Krikalev. They gave me positive feedback, especially Krikalev, who knows the Soyuz inside out.”

“Now I am waiting for another good idea,” says Baroncini about the future. He needs something that will make use of both his technical and creative sides to really get excited. “Engineering is for me an instrument to transform an idea into something concrete,” he says. “I need a good input, and from that I start to develop the idea. The most important step is when I decide to make it real: I am waiting for this kind of inspiration.”