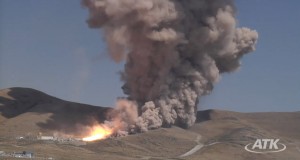 ATK  conducted a third successful ground test of their new solid rocket motor on September 8, 2011 at the company’s motor proving grounds near Promontory, Utah. The test, whose denomination is  Development Motor (DM-3), is considered an important milestone in validation of a rocket that could be used in future heavy lift and commercial launch vehicles.

The main test objectives from today’s static motor firing were measuring the five-segment rocket’s performance and verifying the performance of new materials in the motor joints at hot temperatures. Intentional flaws were introduced in the joint to allow hot gas to penetrate into part of the robust joint to verify joint performance.

The DM-3, measuring 3,65 meters in diameter and almost 50 meters in length, is a five segment derivative of the four segment Space Shuttle booster, upgraded to incorporate technologies and material that were not used on the Shuttle SRB. According to ATK, the new technologies allows a 30 percent power improvement, as well as cost and weight saving.  “This performance makes the five-segment a great solution for heavy lift launch vehicles,” said Precourt.