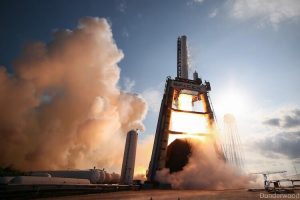 SpaceX’s CEO, Elon Musk, discussed the company’s objectives in the short and long term at the D11 executive conference on May 28.

“The goal is to improve rocket technology and space technology until we can send people to Mars and establish life on Mars,” said Musk. “I agree this is an unlikely outcome, but if we don’t keep improving technology every year, we won’t get there.”

According to Musk, the technical challenge is to have a fully reusable rocket to cut down the cost. In the next couple of years, SpaceX is planning to have a reusable first stage. This new development will reduce the overall cost by three-quarters. Musk has published some pictures on Twitter showing the fire tests of the Falcon 9-R, which is the reusable version derived from Falcon 9. The pictures show an octagonal engines configuration, instead of the 3×3 grid, typical of the Merlin 1D motor.

However, although reusability has not yet been achieved, SpaceX’s success is measured by the fact that the company is able to charge less than other established launch service suppliers.  Since fuel is only 0.3 percent of the rocket’s total cost and materials count the 2 percent, SpaceX have reduced the cost by eliminating what Musk defined as “silly” operations in the construction, cutting down the price for a Falcon 9’s launch to only $54 million.

The confidence in SpaceX is so high that, although the upgraded version of the Falcon 9 with the capacity to accommodate a satellite, has not yet flown, the company’s launch manifesto has been completely filled. SpaceX has already contracted 23 purely commercial missions between 2013 and 2017. Counting ISS resupply and NASA missions, the number is increased to 40 through 2017. The upgraded version of Falcon 9 will be launched for the first time on July 20, carrying the Canadian low Earth orbit science satellite Cassiope. The first commercial launch to Geostationary Transfer Orbit will be the SES-8, a telecommunication satellite owned by Luxembourg based SES, later in 2013.

Meanwhile, Texas Governor Rick Perry has signed a bill that will allow the temporary closure of Boca Chica Beach for safety reasons during rocket launches. Although SpaceX has not yet decided where to build its spaceport, the bill was one of the prerequisites to build a launch facility in the area. According to Musk, South Texas is the leading candidate site for the construction of the launch pad.