All oxidizers for hybrids need to be in liquid form for it to be possible to reliably inject them into the motor.  Some bench-testing had been done with gases, but in the vast majority of cases liquids are used.

I know of no one who has attempted to used nitrogen tetroxide, but doubtless, someone, somewhere, has tried it. 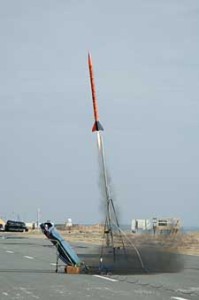 The most popular oxidizer for amateurs and many professionals has been nitrous oxide, because it will self-pressurize from a saturated state at atmospheric temperatures.  This removes the need for pumps and external pressurization. This is, however, a crude approach that has its own problems.  The boil-off pressure varies with temperature and, often, the ullage (space in the oxidizer tank occupied by gas) has to be heated to bring up the pressure to give the desired flow-rate for the motor’s design.  Nitrous oxide gas is susceptible to deflagration/detonation from a variety of ignition sources.  In rocketry, adiabatic compression (dieseling or ‘water hammer’) can occur from events in the rest of the system, including hard-starts, back-shock from a running motor or a loss of pressure differential across the injector.  This phenomeon can initiate an explosive decomposition event.  This danger is present even when the system is being filled, idle but filled, or in a ‘cold flow’ where liquid N2O is fed into the system without ignition.  When a self-pressurized system is activated, pressure in the vessel will drop and the N2O will commence to boil.

Boiling liquids produce gas-pockets throughout their entire volume. As the supply to the motor boils, it becomes compressible.  This causes the classic ‘pulsing’ often observed in N2O hybrid rockets, and it makes injection less stable and harder to predict and control.

The alternative to self-pressurization, is to fill the ullage with an inert gas to provide pressure and to prevent the N2O from boiling and creating compressible N2O gas.  This has the added advantage of delivering a non-compressible liquid to the injector.  As the vessel empties, however, the gas can find its way through the liquid and reduce performance or extinguish the motor.  A dip-tube in the vessel can minimize this effect.  Commonly, nitrogen is used as the pressurant gas, but it will dissolve over time into the N2O and reduce performance.  Other gases such as helium, argon, and even oxygen have been used.  There is some suggestion that helium causes foaming which could reduce performance.  Pressure can be maintained, as the vessel empties, by feeding pressurant gas from an external pressurant tank.  A high flow regulator will keep the push-pressure constant, which makes for a smoother and more predictable performance. 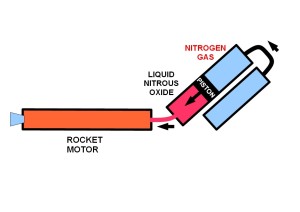 Another method, known as positive displacement, involves more complex engineering. It uses a piston or bladder to separate the push gas from the liquid N2O.  This results in a very smooth and predictable performance, and does away with the problem of pusher-gas being dissolved into the N2O.  If the system is pre-pressurized prior to filling with N2O, it is possible to avoid boiling entirely.  No free N2O gas is formed and the explosion risk is greatly reduced.

All materials have more than the classic three phases of state, solid, liquid, and gas.  There is also the supercritical state, which occurs when temperatures exceed a certain chemical-specific critical point.  For instance, the critical point of nitrous oxide is 36 degrees Celsius.  At this temperature it becomes a supercritical fluid which is compressible and very sensitive to shock.  Oxygen also has a critical point but this is reached at much lower temperatures, and must be avoided by deep refrigeration.

Nitrous oxide is a powerful solvent and it will dissolve hydrocarbon materials very readily.  Solutions of nitrous oxide with hydrocarbons are many times more shock-sensitive than the pure oxidizer itself.  Nitrous oxide can also be catalyzed into decomposition and explosion by many substances, notably iron oxide (rust).  Great attention must be paid to all materials that will come into contact with N2O in a rocket system.

One other downside of nitrous oxide is that it is two-thirds nitrogen, which is dead-weight in oxidization terms. In a rocket motor system this results in a much lower specific impulse than liquid oxygen, which is pure oxidizer.

High-Test Hydrogen Peroxide (HTHP) is a highly corrosive and reactive compound that, again, has to be handled with great care, and for which materials compatibility is of great importance.  It is a liquid that readily decomposes into water and oxygen.  As a liquid, it cannot self-pressurize and must be pumped or pressure-pushed into the injector of a rocket motor.

When passed across a heated catalyst (usually silver oxide), HTHP decomposes rapidly and produces hot, high-pressure steam.  It also frees an oxygen atom, which can be used to burn a fuel grain.  In larger rockets with HTPB, it has proven difficult to get a burn established.  Modifications to fuel grains and the addition of igniters have been tried, but with seemingly limited success.  Daniel Jubb, in the UK is developing a large motor using HTHP and a modified HTPB fuel grain for the Bloodhound jet/rocket powered car.  Jubb has found it needful to include an oxidizer, ammonium perchlorate, in the fuel grain.  This has resulted in some problems including difficulty in extinguishing the motor. 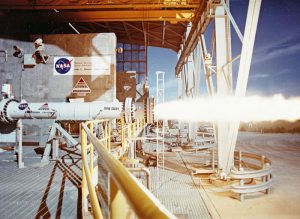 Many of the earlier experimenters, including NASA and AMROC, amongst others, employed liquid oxygen.  They were able to scale motors up to considerable sizes and get them to start reliably.  There was an effort to make these motors into a suitable replacement for solid boosters on systems such as the Space Shuttle, the attraction being that they could be throttled and shut-down.  While liquid oxygen proved an excellent oxidizer for hybrids, and it solved many of the problems encountered in scaling up from smaller motors, fuel grain problems doomed most of these efforts.

One notable exception is the Space Propulsion Group, where novel paraffin fuel grains, combined with liquid oxygen, have performed well and produced impressive specific impulses.  They have ameliorated the problems of handling a cryogenic oxidizer, by using of a solution of nitrous oxide in liquid oxygen, raising the cryogenic temperatures to around minus 45 degrees Celsius.  This liquid, as with liquid oxygen, must be pumped or pressure-pushed, which presents other technical challenges which are by no means insurmountable.  Materials compatibility issues must still be addressed.

When it comes to fuel grains, it is fair to say “If it will burn, we’ll try it!”  Amateurs and professionals have tried everything from sugar, to paper to sausage (yes – sausage!!!).  The basic principal for a hybrid fuel grain is: put a hole down the middle, feed it some oxidizer, and light it.

– In the video below, a salami-powered hybrid rocket engine.

Fuel grains have been the most problematic area of hybrid rocket design.  With truly solid fuel grains there have always been difficulties with ignition, optimum fuel-to-oxidizer ratios, and regression (the rate and pattern of fuel consumption).  As with a solid rocket motor (with an oxidizer port down the middle), the surface of the fuel grain burns away increasing surface area.  This affects chamber pressure and fuel-to-oxygen ratios.  In a hybrid, the fuel grain does not support its own combustion (or perhaps one should say “should not support its own combustion”).

The most used fuel has been HTPB, which is a combustible long-chain polymer that has long been used as a binder and fuel in solid rocket motors.  The use of HTPB has often been ‘received wisdom’ and, often, its suitability for this application has not been questioned.  Amateur rockets, both commercially produced and home-built, tend to use HTPB almost exclusively.  It works quite well in smaller rockets.  However, problems have been encountered when scaling up to motors with thrust in the thousands of pounds range.  It was found hard to initiate combustion, and it was necessary to go beyond a simple cylindrical port along the fuel grain, in order to improve surface area and fuel-grain regression (consumption).  Hybrids with HTPB fuel grains tend to run ‘lean’ (oxygen rich), which can result in high run temperatures that damage nozzles and other components.

Fuel grains are cast with a hole down the long axis just like the ports in solid rocket motors. Many different cross-sections for the bore geometry have been tried, including inverted stars and wagon-wheels.  If a geometry is selected that creates non-continuous regions within the fuel grain, separate injectors are required for each passage-way through the motor.  Fuel grains now became more complex and expensive to produce.  The more intricate the shape, the greater the danger of lumps of HTPB coming loose as structures get burned away.  This results in ejection of lumps and sometimes nozzle blockage, which can be catastrophic.

It is very difficult to cast a large fuel grain with an entirely consistent shape and density. As a result, one port will generally burn faster than another, giving an uneven and inefficient burn.  Hot-spots along the length of a fuel-grain are also common, leaving behind a tell-tale wavy longitudinal cross-section.

A few of the groups working in Hybrid rockets have abandoned HTPB and other solid polymers in fuel grain design.  Notably, Space Propulsion Group is employing paraffins which vaporize into the heart of the motor, removing the need for exotic cross-sections and castings, and the need for multi-point injector assemblies.  They have found a huge increase in reliability, performance and more reliable and faster ignition, thereby avoiding hard-starts.  Autodiverse, in the UK, is using a cellulose wick soaked in kerosene to achieve similar outcomes.

Those who are persevering with HTPB, have, in many cases, had to resort to ‘doping’ fuel grains to overcome ignition and regression problems.  Doping usually involves including oxidizers, such as ammonium perchlorate, and more energetic fuels, such as powdered aluminium or iron oxide.

While helping to address the problems of ignition and regression, other problems surface when this approach is used.  With oxidizer in the fuel grain, ignition can occur beneath the surface of the grain.  This can eject particles and lumps from the motor without being completely combusted and will result in a large ejection of soot and other particles.  The addition of a chlorine-based oxidizer can result in chemical reactions that produce carcinogenic and poisonous substances – especially with partial combustion. 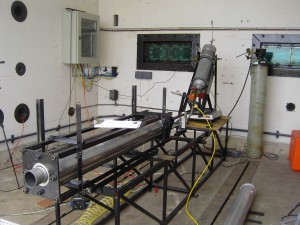 Test of an Autodiverse hybrid rocket at Airborne Engineering at Wescott (Credits: Autodiverse).

If too much of the doping materials are incorporated, it can be difficult, if not impossible, to extinguish the fuel grain. At this point it has crossed the barrier into the arena of solid rocket fuel grains and should be treated as an explosive and toxically hazardous material.

While hybrid rocket motors offer tantalizing prospects for simple and low-cost rocket propelled vehicles, their promise has yet to be realized.  Those motors that are using truly evaporative fuel grains perhaps should no longer be classified as ‘Hybrids’ but rather as a variation of a liquid-fuelled bi-propellant motor.  Autodiverse refers to its kerosene-wick motor as a ‘Bi-bryd’.