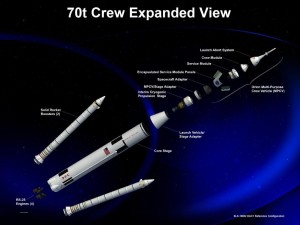 NASA is reverting to hard aluminum-copper alloy Al 2219 for use in the core stage of America’s next heavy-lift launch vehicle, the Space Launch System (SLS), reports NASASpaceflight.com. The change is a move away from more recent super lightweight aluminum-lithium alloy Al 2195 that the Agency used in manufacturing the lightest external tank design of the Space Shuttle, also known as the Super Light Weight Tank (SLWT).  NASA expects that building the SLS core with Al 2219 will reduce production cost, as well as improve stress-endurance strength capability during SLS vehicle take-off and climb to orbit.

“The core stage is the rocket’s central propulsion element and will be an optimized blend of new and existing hardware design,” SLS Program Manager Todd May said following a successful Preliminary Design Review of that component in December. “We’re building it with longer tanks, longer feed lines, and advanced manufacturing processes.”

The new tank will measure 61-meters tall and 8.4-meters in diameter. It will store liquid hydrogen and liquid oxygen at low and elevated temperatures, feeding the RS-25 engines. Prime contractor Boeing is developing the SLS core stage, which will be built at NASA’s Michoud Assembly Facility in New Orleans.

Mass management, strength, and stiffness are highly relevant factors in developing the SLS ET,  as engineers endeavor to design a cost effective and improved performance component. The core stage is a modified Space Shuttle ET with the aft section adapted to accept the rocket’s Main Propulsion System (MPS) and the top converted to host an intertank structure.

During the shuttle era, NASA experienced lower production costs for SWTs than for SLWTs because of the exceptional material properties of Al 2219.  In particular, the SWT offered excellent resistance to corrosion, maximum strength-to-weight ratio, ease of fabrication, and operation under room and cryogenic temperatures. Aluminum-copper alloy offered excellent weldability such that engineers reliably sealed joints with fewer weld passes and without distortions. As a result, NASA reduced weld repair and inspection costs. However, a reduced cost is only one of many key driving forces for material development. Mass reduction and application-specific performance improvement are two other factors.

The original ET design had a 35,000 kg dry mass; six of the units were produced and flown between 1981 and 1983. Prior to its production, NASA had already identified a need for increased payload capability to meet additional performance requirements. The Agency issued a directive to lighten ET by at least 2,700 kg. NASA undertook a series of modifications and enhancements such as resizing structural membranes, eliminating hardware elements, and substituting materials to successfully reduce tank weight by nearly twice the targeted value. The resulting 30,000 kg ET design was known as the Light Weight Tank (LWT).  Still fabricated with Al 2219, NASA produced and flew 86 LWTs during 1981-1998.

The Agency identified the need for further increase in payload capability to support construction of the International Space Station (ISS) in a Russian-accessible orbit. However, further ET mass reduction without material change proved to be hard nut to crack. In order to achieve a target 25-percent weight reduction in ET and enable greater payload upmass, NASA undertook a lightweight efficient design approach in 1993 that became known as the SLWT program. The program focused on the development of a high-strength, low-density, lighter-weight alloy, aluminum-lithium alloy Al 2195, which replaced Al 2219 and reduced the ET to its target mass.  Aluminum-lithium alloy offers the benefit of improved yield strength, stiffness, and reduced density. The SLWT used Al 2195 in place of traditional Al 2219 at several locations on the LO2 and LH2 Tanks. During 1998-2011, the last decade of the Shuttle era, NASA produced and flew 43 SLWT tanks.

Welding Al 2195 during production of SLWT was more complex than welding Al 2219 during production of SWT. Most significantly, NASA used Al 2195 orthogrid barrel panels for the SLWT configuration in place of the Al 2219 T-stiffened panels used for SWT and LWT configurations. In addition, the use of orthogrid wall construction for the LH2 tank required development of new manufacturing process for machining, forming, and welding of barrel assemblies. The ET pressure vessels required more than 0.8 km of welding to join together the aluminum panels that form the LO2 and LH2 tanks. With the use of the new alloy, production and operation costs of the ET increased significantly.

Ultimately, NASA is dropping super lightweight aluminum-lithium alloy and taking up hard aluminum-copper alloy for production of the core stage of the SLS, America’s next heavy lift vehicle, intended to launch astronauts and other payloads to Earth orbit and beyond. With that decision, NASA has come full circle of a material development journey that started more than 30 years ago with production of the original Space Shuttle ET.