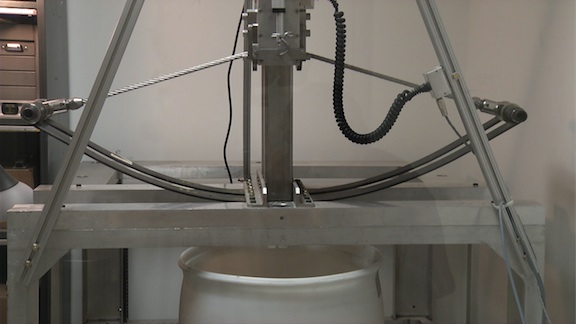 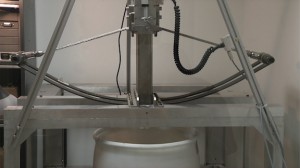 Perfoming a rendezvous and landing operation on a comet is a risky task due to comets’ rotational rates, rugged surface, and low gravity. NASA is therefore developing an alternative – a harpoon that may be launched from a rendezvoused spacecraft to obtain a sample from a comet without performing a landing maneuver.

A prototype harpoon, which has been constructed at NASA’s Goddard Space Flight Center, could be fired from a large metal crossbow known as a ballista from as much as 1.6 km away. The harpoon would be fired directly into the comet’s surface at up to 30.5 m/s.

“We’re not sure what we’ll encounter on the comet – the surface could be soft and fluffy, mostly made up of dust, or it could be ice mixed with pebbles, or even solid rock,” said lead researcher Daniel Wegel. “Most likely, there will be areas with different compositions, so we need to design a harpoon that’s capable of penetrating a reasonable range of materials. ”

Once lodged in a comet, the harpoon would grab a surface sample and store it in its hollowed core. Multiple harpoons could be loaded on a single spacecraft for collection from different sites or even multiple comets.

Sample collection is of interest because comets have complex compositions including amino acids, the building blocks of life. Some scientists think that life on Earth could have been instigated by a comet or meteorite impact. This highlights a second objective of comet analysis: evaluate the threat an impacting comet could pose to Earth today. Returning samples to Earth permits a more thorough analysis, using instruments that have not been adapted to space flight.

The harpoon concept is being utilized in ESA’s Rosetta mission to land the probe Philae on a comet in 2014.”We will piggyback on their work and take it a step further to include a sample-collecting cartridge,” says Wegel.

The video below show’s a possible future mission deploying the comet sampling harpoon.