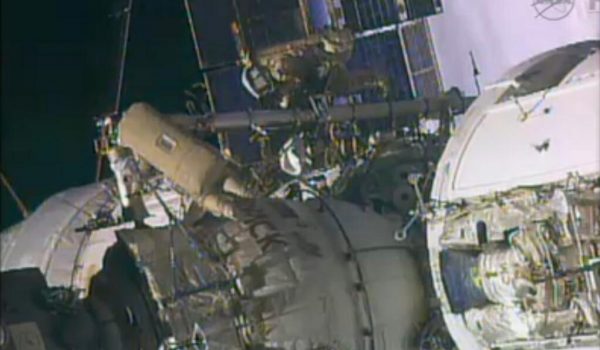 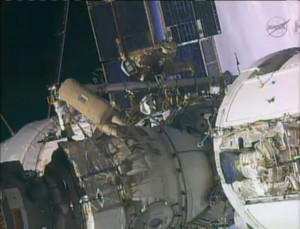 Yurchikhin and Misurkin translating on the Strela boom, during EVA-33 (Credits: NASA TV)

Two Russian cosmonauts ventured outside of the International Space Station (ISS) in a scheduled spacewalk to test and upgrade new equipment on the Russian segment of the orbiting laboratory, on June 24.

Veteran cosmonaut Fyodor Yurchikhin and crewmate Alexander Misurkin began their 6.5-hour spacewalk at 13:35 GMT. The two cosmonauts spent several hours the previous week preparing for this 33th Russian extravehicular activity (EVA) from the ISS. They also had a “dry run” exercise with the Russian Orlan spacesuits to check comfort levels and mobility inside the airlock compartment, on June 21.

The main task of EVA-33 was the removal and replacement of a fluid flow regulator, part of the thermal control system of the Zarya module. On their way to the Zarya module, Misurkin made a stop to connect some cables of the Russian KURS navigation system, to allow mission control to perform a test of the system in preparation for the arrival of the Multipurpose Laboratory Module (MLM) in 2014. The crew then continued their translation along the Strela telescopic crane to reach the Zarya module, where they installed the new regulator. The removed hardware was put into the same pressurized container used to carry the pump assembly to the module. Then the cosmonauts struggled a bit installing the cable clamps  used to  hold the cables providing power for the new Russian module. The last part of the EVA was dedicated to the placement of handholds to aid future spacewalks, installation of the Indikator-MKS science hardware on the Poisk module, and retrieval of experiments from outside the station.

The EVA required the juncture known as the Transfer Compartment (PkhO) to be sealed off and the vehicles docked to ISS were prepared for emergency undocking. Progress M-18M, berthed to the Pirs module where the airlock is located, was activated and the hatches closed. ATV-4’s hatches were also closed and the spacecraft was prepared for an emergency undocking from the Zvezda service module. Commander Pavel Vinogradov and astronaut Chris Cassidy remained confined between Poisk module and Soyuz TMA-08M, while astronauts Karen Nyberg and Luca Parmitano were in the US segment of ISS, from where, in case of emergency, they could have easily reached the Rassvet module where the Soyuz TMA-09 is docked.

The next spacewalk is scheduled to be conducted by astronauts Cassidy and Parmitano in July.

Below, video clip from the end of today’s EVA: