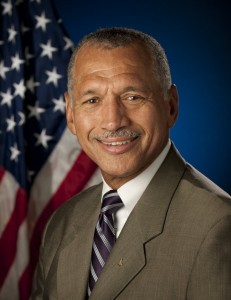 Recently, I had the privilege of participating in a bipartisan congressional event that reaffirmed several of the most enduring and empowering characteristics of the American spirit — our innate curiosity, courage to explore and thirst for knowledge. A former space shuttle pilot and commander, I was inspired to join NASA’s astronaut corps in 1980 in part because of the trailblazing exploits of John Glenn, Neil Armstrong, Buzz Aldrin and Michael Collins — recipients on Nov. 16 of the Congressional Gold Medal, the nation’s highest civilian honor. In 1962, Glenn was the first American to orbit the earth. In 1969, Armstrong and Aldin were the first earthlings to walk on the moon. Collins was their command-module pilot orbiting the moon in solitude during their descent into history in the lunar lander Eagle.

All over the world, these men and the American astronauts who followed in their footsteps have been revered for stretching the boundaries of the possible. They have come to symbolize America as a nation that can work miracles. While there are some who would have us believe our best days are behind us, I refuse to believe that’s true. With the new mandate from the president and Congress to take our astronauts well beyond low Earth orbit to places we have never been before, NASA and America are ready to make new miracles.

In the tradition of Apollo, for the past 30 years our shuttle astronauts have led the exploration of our solar system, helping to build the remarkable International Space Station and greatly expanding our knowledge about what it takes to live and work in space. With the end of the shuttle program, we are now setting our sights on even more distant horizons. 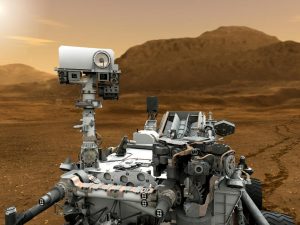 Evidence of that was seen Nov. 26, when the most advanced mobile robotic laboratory ever built lifted off from Florida’s Cape Canaveral Air Force Station on an eight-month journey to Mars. The supersonic wind tunnel at the NASA Glenn Research Center in Brook Park was used to test a small-scale version of the aeroshell and parachute designed for the Mars Science Laboratory’s (MSL) entry, descent and landing system.

The MSL mission will carry and land a rover with the most high-powered scientific capability of any ever sent to another planet. Aptly named Curiosity, this robotic laboratory will investigate whether conditions have favored development of microbial life on the Red Planet and whether they have favored preservation, in the rock record, of evidence about whether life has existed. It is an important step along the path to eventual human missions to Mars. 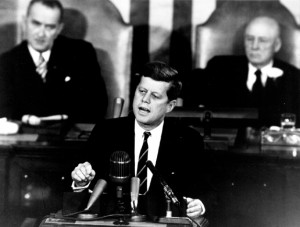 President Kennedy issuing the challenge to send a man to the moon.(Credits: NASA)

Fifty years ago, President John F. Kennedy challenged the nation to reach the moon, to “take longer strides” toward a “great new American enterprise.” Today, another young president, with bipartisan support in Congress, has challenged us to reach for new heights — to rendezvous with an asteroid by 2025 and send humans to Mars by the 2030s. NASA is developing a Space Launch System (SLS) that will be capable of transporting astronauts and cargo into deep space. Together with our industry partners, we are developing the next-generation human-spaceflight system, including commercial transport to the International Space Station and completion of the Orion Multi-Purpose Crew Vehicle that will take astronauts beyond low Earth orbit for the first time since the Apollo-17 lunar mission in 1972. Our plans call for an unmanned system test flight of the Orion and SLS in 2017 and a crewed test flight in 2021.

Five members of NASA’s most recent Astronaut Candidate Class attended the Congressional Gold Medal ceremony. Some of them will be the first Americans to travel to the International Space Station aboard U.S. commercial spacecraft. Some of the astronauts we are currently recruiting will be pioneers in our missions to make the first footprints on the surface of Mars. Congress’ support of the MSL mission recognizes its importance to national technology, scientific advancement and the inspiration of students.

It is also important to remember that the $2.5 billion investment in this project is not spent on Mars, but on Earth, mostly in the United States. More than 5,000 people, including two dozen small businesses, have worked on this mission in some capacity, in at least 31 states.

Our Mars mission is not without risk and, as in every NASA space flight, we expect to encounter some surprises. But as President Kennedy put it, we choose to do these things “not because they are easy, but because they are hard.” That is what we do at NASA. That’s what our astronauts do. As we set out to explore the farthest reaches of space, we continue to be guided by a single vision: “To reach new heights and reveal the unknown so that what we do and what we learn will benefit all humankind.”

Originally published by PlainDealer on Cleveland.com on Dec. 3, 2011. Published with permission of the author and the publisher.

The opinions expressed herein are those of Mr. Bolden, and do not necessarily reflect those of IAASS and ISSF, publishers of the Space Safety Magazine.