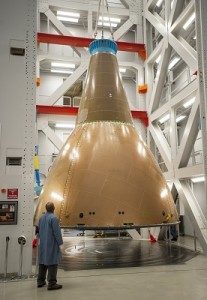 NASA has begun static load testing on the Orion Launch Abort System (LAS) Fairing Assembly. The flight hardware will be used to cover and protect the crew module during Exploration Flight Test-1 (EFT-1), planned for September 2014.

“The fairing surface interacts with the atmosphere as we launch through it,” explains Kevin Rivers, LAS project manager at NASA’s Langley Research Center. “It plays a significant role in the EFT-1 launch. It’s got to maintain structural integrity and protect the spacecraft.”

The 1350-kilogram LAS fairing is a lightweight composite structure that protects the capsule from heat, wind or acoustics. During static loads testing, the structure is placed into a large steel frame where loads are applied by 10 hydraulic actuators. The applied external loads have to simulate the aerodynamic pressures and bending moments experienced during flight. The structure’s response is measured by 36 strain gauges and 26 displacement sensors. According to Gary Keyser, Lockheed Martin LAS lead system engineer, the test helps to verify that the structure can withstand the worst-case flight loads by testing to higher levels than would be experienced in reality. Moreover, it helps to better understand how well the engineering analysis predicts real flight vehicle behavior.

During EFT-1, Orion will be launched to an altitude of 6000 kilometers, returning at a speed over 32000 km/h for a splash down in the Pacific Ocean. The LAS is supposed to jettison the crew module away from the launch vehicle in case of emergency at the pad or during the initial ascent.

Lockheed Martin, which is the prime contractor for the Orion crew capsule, is conducting the study along with several other tests for module components. Orion is designed as a vehicle to transport humans beyond low Earth for long duration missions. According to Rivers, there are so many challenges involving radiation exposure, communications, and life support, that the emergency systems have to be significantly more complex

Orion’s first launch is scheduled for 2017, where it will fly an unmanned mission around the Earth’s moon.  It will be launched atop Space Launch System heavy-lift rocket.