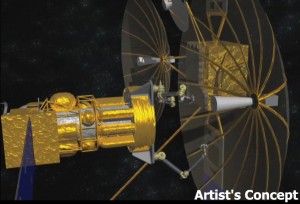 More than $300 billion worth of satellites are estimated to be in the geosynchronous orbit (GEO—22,000 miles above the earth). Many of these satellites have been retired due to normal end of useful life, obsolescence or failure; yet many still have valuable components, such as antennas, that could last much longer than the life of the satellite. When satellites in GEO “retire,” they are put into a GEO disposal or “graveyard” orbit. That graveyard potentially holds tens to more than a hundred retired satellites that have components that could be repurposed – with the willing knowledge and sanction of the satellite’s owner.  Today, DoD deploys new, replacement satellites at high cost—one of the primary drivers of the high cost is the launch costs, which is dependent on the weight and volume of antennas.  The repurposing of existing, retired antennas from the graveyard represents a potential for significant cost savings.

The goal of the Phoenix program is to develop and demonstrate technologies to cooperatively harvest and re-use valuable components from retired, nonworking satellites in GEO and demonstrate the ability to create new space systems at greatly reduced cost.  Phoenix seeks to demonstrate  around-the-clock, globally persistent communication capability for warfighters more economically, by robotically removing and re-using GEO-based space apertures and antennas from de-commissioned satellites in the graveyard or disposal orbit.

The Phoenix program envisions developing a new class of small ‘satlets’, or nano satellites, which could be sent to the GEO region more economically as a “ride along” on a commercial satellite launch, and then attached to the antenna of a non-functional cooperating satellite robotically, essentially creating a new space system, leveraging the System F6 architecture.  A payload orbital delivery system, or PODS, will also be designed to safely house the satlets for transport aboard a commercial satellite launch. A separate on-orbit ‘tender,’ or satellite servicing satellite is also expected to be built and launched into GEO. Once the tender arrives on orbit, the PODS would then be released from its ride-along host and link up with the tender to become part of the satellite servicing station’s ‘tool belt.’ The tender plans to be equipped with grasping mechanical arms for removing the satlets and components from the PODS using unique space tools to be developed in the program.

The traditional process of designing, developing, building and deploying space technologies is long and expensive. Through Phoenix DARPA seeks to hasten the insertion of emerging technologies into space system development at much lower cost.

Critical to the success of the Phoenix program is active participation from the international and non-traditional space communities involved in vital technical areas such as:

The first keystone mission of the Phoenix program in 2015 plans to demonstrate harvesting an existing, cooperative, retired satellite aperture, by physically separating it from the host non-working satellite using on-orbit grappling tools controlled remotely from earth. The aperture will then be reconfigured into a ‘new’ free-flying space system and operated independently to demonstrate the concept of space “re-use.”