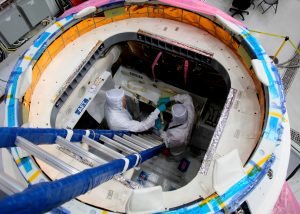 A view inside the Dragon capsule that will be loacked with 1,200 tons of supplies for ISS (Credits: SpaceX).

Source: NASA/Steven Siceloff The upcoming launch of a SpaceX spacecraft and rocket on a demonstration flight to the International Space Station is expected to cross a key milestone on the path to operational, commercial missions. “It’s almost like the lead-up to Apollo, in my mind,” said Mike Horkachuck, NASA’s project executive for SpaceX. “You had Mercury then you had Gemini and eventually you had Apollo. This would be similar in the sense that, we’re not going to the moon or anything as spectacular as that, but we are in the beginnings of commercializing space. This may be the Mercury equivalent to eventually flying crew and then eventually leading to, in the long run, passenger travel in space.” California-based Space Exploration Technologies, known as SpaceX, is preparing to launch an ambitious mission to dock its Dragon spacecraft to the space station and return it to Earth. The spacecraft will not have a crew, but will carry about 1,200 pounds of cargo that the astronauts and cosmonauts living on the station will be able to use. The capsule will go into space atop a Falcon 9 rocket also built by SpaceX. Because the mission is a test flight, the cargo is not material deemed critical to the crew, Horkachuck said. Launch is targeted for April 30 from Space Launch Complex 40 at Cape Canaveral Air Force Station in Florida, within sight of the launch pads the space shuttles used to carry the station’s components into orbit. There also are several tests and reviews coming up later this month similar to those performed ahead of space shuttle missions. If this mission is successful, the Dragon is expected to become operational and launch regular supply runs to the station. Unlike any other cargo carrier, the Dragon can bring things back to Earth, too, a boon for scientists whose research is taking place on the orbiting laboratory. 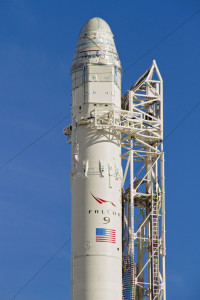 The Dragon capsule sitting atop a Falcon 9 on the launchpad in a recent test (Credits: NASA/Cory Huston).

SpaceX already has two successful Falcon 9 launches to its credit, along with a history making demonstration of the Dragon capsule that in December 2010, became the first privately built and operated spacecraft to be launched to and recovered from Earth orbit. “I think the (first demonstration) mission was more of a question mark in my mind,” Horkachuck said, “because no capsule that these guys had built before had gone into space, done the basic maneuvering to show you have attitude control as well as re-entering, so knowing the vehicle came through re-entry relatively unscathed and all the parachute systems worked perfectly, that was a real big deal.” Because of that mission’s achievements, NASA and SpaceX agreed to combine the planned second and third demonstration flights into one. Assuming the Dragon spacecraft passes about a few days’ worth of equipment checks and demonstration in orbit, it will be allowed to approach the station close enough for astronauts to grab the Dragon with the station’s large robotic arm. The arm will berth the capsule to the station and astronauts will unload the spacecraft and put about 1,400 pounds of material inside the Dragon for return to Earth. The mission is expected to last about 21 days, Horkachuck said. For Horkachuck, work for this mission began more than five years ago, when SpaceX and NASA signed a Space Act Agreement to work together to demonstrate they could carry cargo to the space station on a private rocket and spacecraft. NASA is sharing the cost for the demonstration missions under the COTS program, short for Commercial Orbital Transportation Services. “It’s been a very good experience,” Horkachuck said. “The Space Act Agreement lets us interact with the contractor in a much more cooperative way than the typical government contract does. We can suggest how we’ve done it in the past and maybe they’ll use that, or they’ll come up with a slightly altered version to work through a challenge.” Getting the rocket, spacecraft and overall mission together has been a learning experience for both SpaceX and NASA, Horkachuck said. For instance, SpaceX learned how much more work is involved in flying to a space station with a crew on board, compared with launching a spacecraft and recovering it after a few orbits. “Every big project is going to have various technical challenges,” Horkachuck said. “One of the refreshing things has been, once you convince SpaceX they need to make a change and it’s the right thing to do from a technical perspective, they just go off and do it. There’s not a lot of wrangling.” The partnership has shown NASA a blueprint for handling future missions, too. “If you’ve got a good relationship with the partner, it’s an outstanding way of doing business,” Horkachuck said. All that said, rocketry and spaceflight remain tricky businesses that are unforgiving of even slight oversights. “The history of all rocket launches is that you can have a successful mission and then some tiny little thing can come bite you on the next mission,” Horkachuck said. “There’s so many little things that can go wrong, you have to always be diligent about every little thing.” The Falcon 9 rocket and Dragon capsule are at Cape Canaveral undergoing final preparations ahead of the launch. For Horkachuck, the three weeks in orbit will be filled with the tension familiar to anyone involved with a spaceflight, he said. “Once Dragon gets into orbit and is operating, there’s certainly going to be a big cheer,” he said. “But I think most of the big events and dynamic events in this spaceflight really culminate when you finally have splashdown. Throughout the mission, there will be moments of panic followed by long periods of calm.”