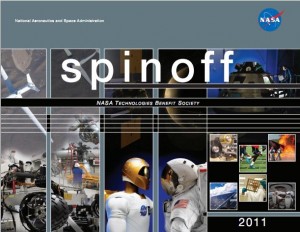 The latest edition of Spinoff records 44 journeys of NASA’s most innovative technologies. It chronicles their origins in NASA missions and programs and their transfer to the public in the form of practical commercial products and benefits to society.

“This year’s Spinoff demonstrates once again how through productive and innovative partnerships, NASA’s aerospace research brings real returns to the American people in the form of tangible products, services and new jobs,” NASA Administrator Charles Bolden said. “For 35 years, Spinoff has been the definitive resource for those who want to learn how space exploration benefits life on Earth.”

In Spinoff 2011, readers can discover:
–     A new firefighting system, influenced by a NASA-derived rocket design that extinguishes fires more quickly than traditional systems, saving lives and property.
–    Software employing NASA-invented tools to help commercial airlines fly shorter routes and help save millions of gallons of fuel each year, reducing costs to airlines while benefiting the environment.
–     A fitness monitoring technology developed with the help of NASA expertise that, when fitted in a strap or shirt, can be used to measure and record vital signs. The technology is now in use to monitor the health of professional athletes and members of the armed services.
–    An emergency response software tool that can capture, analyze and combine data into maps, charts and other information essential to disaster managers responding to events such as wildfires, floods or Earthquakes. This technology can save millions of dollars in losses from disasters and, more importantly, can help save lives when tragedy strikes.

This year’s Spinoff includes a special section to celebrate the commercial technologies that resulted from NASA’s 30-year Space Shuttle Program. Also featured are spinoffs that have come from the construction of the International Space Station and work aboard the orbiting outpost. An additional section discusses the potential benefits of NASA’s future technology investments.

“NASA’s Office of the Chief Technologist has more than a thousand projects underway that will create new knowledge and capabilities, enabling NASA’s future missions,” NASA Chief Technologist Mason Peck said. “As these investments mature, we can expect new, exciting spinoff technologies transferring from NASA to the marketplace, providing real returns on our investments in innovation.”

Spinoff 2011 is available at http://spinoff.nasa.gov. An archive of Spinoff features and a searchable database of more than 1,750 NASA-derived technologies featured in past issues of the publication also are available at the Spinoff site.