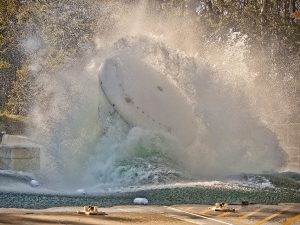 Source NASA: Engineers conducted the first test as part of Phase 1 of the Orion MPCV boilerplate test article at NASA’s Langley Research Center, on Oct. 18. The 18,000-pound (8,165 kg) test article — representative of the Orion Crew Module — was drop tested at a 43-degree relative pitch angle and a 30-degree roll angle and traveled at 27 mph (43 kph) horizontal velocity before splashing down in the Hydro Impact Basin.These test conditions represent an off-nominal splashdown following an ascent abort scenario and include predictions of rough seas.

As predicted through analytical simulations, the capsule pitched forward and came to rest in a Stable 2 (upside down) position during the test. “It is important to understand the different scenarios in contingency water landings,” said project manager Lynn Bowman. “This is why we have a crew module up-righting system designed for the actual flight vehicle.”

Since initial Phase 0 testing this summer, the Phase 1 boilerplate test article was modified so that it is more representative of the actual flight vehicle. Modifications to the test article included removal of Phase 0 reinforcement structure to configure the heat shield to now be flexible instead of rigid. The change in heat shield configuration will allow engineers to assess structural response of the heat shield structure versus analytical predictions, and to simulate the flight vehicle load paths to assess load distribution throughout the test article due to water impact.

Five more drop tests are planned through the end of the year with varying impact angles and velocities.