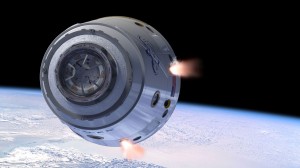 SpaceX announced the completion of the preliminary design review of the Dragon spacecraft’s launch abort system. Since the end of space shuttle program in summer 2011, NASA depends on Russian Soyuz to ferry astronauts to the ISS, with a cost of about 62 million dollars a seat. This is another important step for USA to regain the possibility of launching human crew on their own.

The recently approved launch abort system promises an unprecedented level of safety: as David Giger, co-leader of DragonRider program explains “the integrated launch abortion system provides astronauts with the ability to safely escape from the beginning of the launch until the rocket reaches orbit.” The revolutionary concept aims to build escape engines into the Dragon’s sidewalls rather than use a tower with motors that would pull it off the rocket, as it happens with NASA’s Orion capsule. The Dragon capsule is designed to be reusable: this means that the abort system won’t be lost during every flight. Re-usability may reduce the flight cost, helping SpaceX to achieve the ambitious target price of 20 million dollars per seat. In the future, the system will also be used for rocket powered landing, a feature that might enable the Dragon land on the Moon or Mars. With the preliminary design approved by NASA, SpaceX is now free to build the hardware.

In the meantime, SpaceX has completed the delivery of a Dragon spacecraft to Cape Canaveral, for a launch scheduled for December 19, 2011. The company is aiming at a rendezvous and docking with the International Space Station, a plan that has not yet been approved by all the ISS partners. If successful, it will be the first time a private company docks a spacecraft to the ISS. The spacecraft will be launched on top of a Falcon 9 , a rocket that has already performed two successful flights in 2010.

In the video, below, artist’s conception of powered landing of the Dragon capsule.