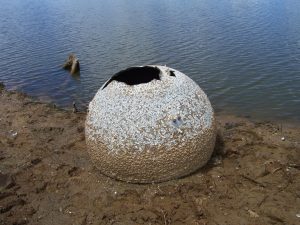 An aluminum tank from Space Shuttle Columbia has been found in Lake Nacogdoches, Texas in August 2011. The fragment emerged from the lake following an unusually severe drought. NASA has recognized the fragment as a Shuttle tank, and is now organizing its recovery. Soon the tank will be brought back to NASA Kennedy Space Center, in Florida, along with the other fragments of the spacecraft.

Space Shuttle Columbia broke up during reentry on February 1, 2003, after a 16 days mission. Analysis of the Shuttle debris will provide important clues on how to improve the design and the safety of future vehicles.