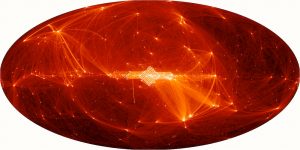 16 years after its 1995 launch aboard a Delta II rocket, NASA’s Rossi X-Ray Timing Explorer (RXTE) was decommissioned earlier this month. The RXTE was launched four months prior to NASA’s current space debris standard was implemented and is ten times more likely than today’s satellites to harm a person after reentry. “The spacecraft and its instruments had been showing their age, and in the end RXTE had accomplished everything we put it up there to do, and much more,” said Tod Strohmayer, RXTE project scientist at Goddard. The RXTE will likely undergo uncontrolled atmospheric reentry sometime between 2014 and 2023, largely depending on solar activity levels. It is common for satellites with a 1-in-1,000 chance of causing injury such as RXTE to reenter the atmosphere every few years. NASA’s Upper Atmospheric Research Satellite, which reentered over the Pacific Ocean in September, was rated at a 1-in-3,200 risk level. Today’s standard calls for no more than a 1-in-10,000 chance of impacting a person. To-date, no one is known to have been injured by a reentering spacecraft. The RXTE had an observatory mission, using X-ray wavelength emissions to study the environment around white dwarfs, neutron stars, and black holes. The spacecraft was launched as the X-Ray Timing Explorer, but was renamed a few months later after Bruno Rossi, a pioneer of X-ray astronomy and plasma space physics who died in 1993. According to NASA, RXTE opened a new window into the workings of neutron stars and black holes. Using its data, astronomers established the existence of highly magnetized neutron stars (known as magnetars) and discovered the first accreting millisecond pulsars, a previously unseen stage in the formation of “recycled” millisecond radio pulsars that were first glimpsed in the early 1980s. The observatory also provided the first observational evidence of “frame-dragging” in the vicinity of a black hole, an effect predicted by Einstein’s general theory of relativity. Data from RXTE was used to create the animation below of “heartbeats'” of two companion black holes, one of which may be the smallest black hole yet discovered.