Despite heightened security tensions in Jerusalem, a crowd of over 2,000 people from 58 nations gathered for the 66th Annual International Astronautical Congress (IAC), the largest annual event designed for the study and development of the space industry.  The event is being hosted by the Israel Space Agency and the choice of Jerusalem is generally regarded as a testament to the growing role that Israel has come to play in space initiatives.

In opening remarks to the IAC, Israel President Reuven Rivlin said, “When I look up to the stars I think of our dear son Ilan Ramon who died in the Columbia disaster who was a man who looked to discover the mysteries of science.”

Israel’s Minister of Science, Technology and Space Ofir Akinus offered his remarks saying, “This gathering is a remarkable salute to the advancement of science and the space industry here in Israel.  This conference in Jerusalem at this time is the ultimate proof that no violence or terror will defeat us.  The best response that we can offer today is through this demonstration through thousands of guests filling the halls of this conference and the streets of Jerusalem.”

Mr. Kiyoshi Higuchi, President of the International Astronautical Federation   stressed a theme of cooperation that was being echoed by many of the delegates that, “International networking is becoming more essential than ever before to build a global infrastructure.”

The IAC will feature a five-day program with some 2,600 academic papers presented. Among the attendees are the heads of all the major space agencies including NASA Administrator Charles Bolden who will announce a new working agreement with the Israel Space Agency.  Speaking with reporters, Bolden focused on the recent New Horizons mission which reached Pluto in recent months and returned remarkable images which grabbed the attention of the world.

Famed moonwalker Buzz Aldrin is also attending and remarked on his impressions of the Israeli space program and said he looked forward to continued accomplishments out of Israel.  He also joked that the only reason that Neal Armstrong was able to make the historic first step on the moon “was because he was standing closer to the door.”

Aldrin remains very active in promoting initiatives in the area of space discovery and travel and opened his remarks by saying, “I feel very fortunate to come along at this time in human history.”  While in Jerusalem, Aldrin also helped launch a new initiative together with the Israel Space Agency and the Israeli Ministry of Science and the Heinlein Foundation which would promote interest in space education amongst Israeli youth.   The Foundation presented three original space suits which will travel among Israeli schools.

Heinlein Foundation representative Hart Dola said, “We hope that we will be able to show the young people that when there is a positive vision for humanity like that represented by space discovery and if you show a child a positive vision then they can achieve anything that is possible.”

The Congress will discuss many of the key developments reached from in the space industry in recent months including the discovery of water on Mars which is sure to encourage the conversation over planned manned missions to the Red Planet as well as plans to return space to the moon.  NASA Administrator stressed that Mars was a focus of the agency’s activity and that “Our focus is on getting humanity to Mars.” 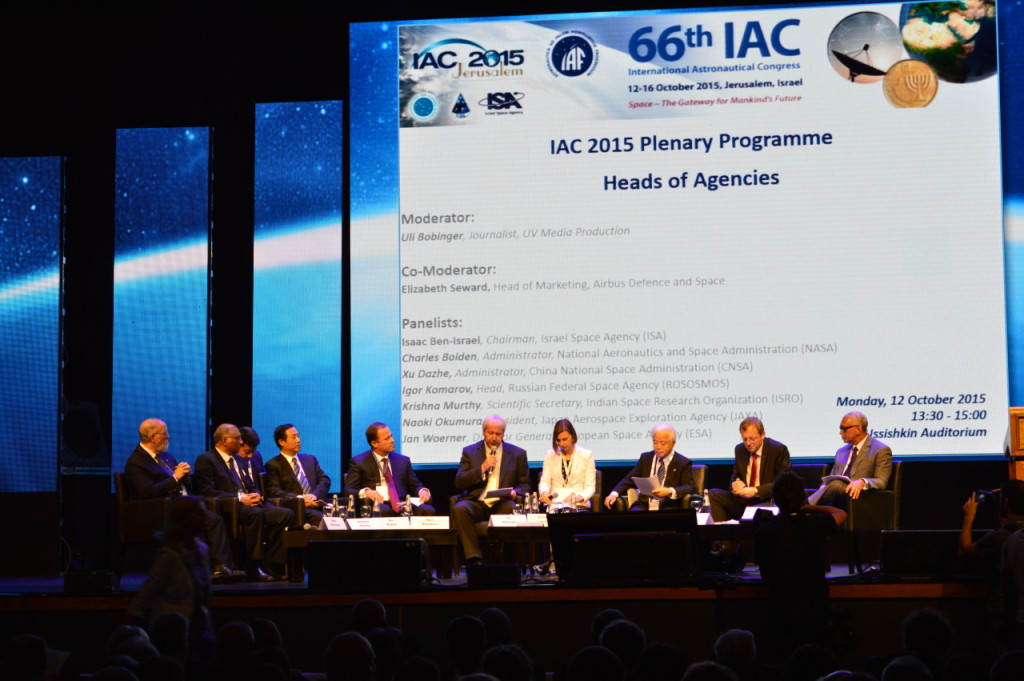