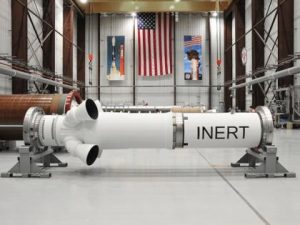 The innert motor built by ATK to be integrated in Orion capsule (Credits ATK).

An inert launch-abort motor for NASA’s first Orion Multi-Purpose Crew Vehicle arrived at NASA’s Kennedy Space Center on February 21. The motor will be  integrated with the capsule, although it will have no role in Orion’s first two flights.

“The main abort motor is what we’re talking about here,” said Charles Precourt, vice president of ATK’s Space Launch Systems division and former astronaut, “the 2 motors we do at ATK will be inert, if you will. They don’t need to function without a crew. We don’t plan an abort and we don’t need to fire to test the functionality of an abort.”

The motor is designed to produce 2,224 kilonewtons of thrust, enough to bring Orion and its crew to safety if something goes wrong during the launch. ATK Space Launch Systems is providing two of the three motors for Orion’s launch abort system while the main motor is made by Aerojet.

The launch-abort motors will not be tested during Orion’s 2014 unmanned flight debut. The system will remain inert and it will be jettisoned shortly after the capsule passes through the Earth’s atmosphere. The first launch will see an unmanned version of the capsule, carried into orbit by a Delta 4 rocket, reaching the maximum altitude of 58,000 kilometers and re-entering Earth’s atmosphere after two orbits. The launch-abort motors will be tested with an altitude abort test only prior to the first manned mission, currently scheduled for 2021. Originally, the altitude abort test was scheduled for 2015 but it was postponed due to budget reasons. In the test, an Orion capsule will be launched from Cape Canaveral on a converted Peacekeeper missile stage, which is one of the assets left  from the cancelled Constellation program.

The launch-escape motor was last fired on a pad at the White Sands Missile Range, New Mexico, on May 6, 2010. The test involved the three motors propelling a dummy crew module at 716 kilometers per hour to around 2 kilometers high, with the main motor providing 2,224 kilonewtons of initial thrust to get it off the ground. The attitude control motor fired simultaneously with the abort motor using 8 thrusters to keep the capsule on course. Following the main abort motor’s burn off, the jettison motor, which is the only motor of the three that would be used in all nominal rocket launches, pulled the entire launch abort system away from the crew module. After explosive bolts fired and the jettison motor separated the system from the crew module, the recovery parachute system was deployed.