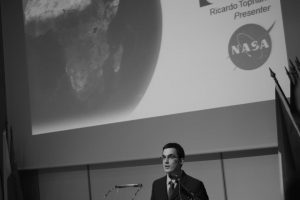 The title of this year’s symposium was “Space Technology and Tele-reach: Benefiting Humanity on Earth and Beyond.”

Tele-reach, according to the symposium program’s definition, is a term used to refer to technologies and applications which allow remote presence, participa­tion, interaction or control.  Essentially, tele-reach allows a human presence, without a human being present, and can refer to communications, tele-health, tele-robotics, and so on.

The 3 day symposium was divided into 6 half day sessions covering a range of technical, political and economic areas, and featured speakers from ESA, NASA, Boeing and Lockheed Martin, as well as academics from universities around the world.  Being a tele-reach symposium, there were extra provisions made this year to enable better tele-conferencing facilities, to enable lectures and talks from speakers who couldn’t be physically present.

The first day kicked off with opening remarks from ISU president Walter Peeters, before moving onto the first video linked keynote speech from Mazlan Othman, Deputy Director-General, United Nations Office at Vienna, and Director of the Office for Outer Space Affairs. Othman offered commentary on the “United Nations Platform for Space-based Information for Disaster Management and Emergency Response,” also known as UN-SPIDER, as well as insight into use of nuclear propulsion, from a legal perspective.

Next up were presentations from ESA, highlighting the aspects of utilizing tele-reach for achieving sustainable development, and also from Jessica Samuels of JPL, who gave insight into the operational elements of the Mars Curiosity rover, specifically with regards to the day to day planning and to JPL’s varying shift patterns, which alternate between Earth time and Mars time (known as “Sols”).

Other talks in the first session included a talk from ISU students on tele-reach systems for the Southern Hemisphere, which stemmed from a project at ISU’s SHSSP (Southern Hemisphere Space Studies Program) and a presentation on the Chang’e-3 Mission from Geshi Tang, Director of Science and Technology on Aerospace Flight Dynamics Laboratory, BACC, China.

The afternoon session was focused on tele-education, and included a talk on tele-reach applications for the lunar surface from Jim Burke of The Planetary Society and current MSc students from ISU.  This talk was focused on “Phase 3” of ISU’s development, as envisioned by ISU founders Peter Diamandis, Todd Hawley and Bob Richards.  Phase 1 of the long-term ISU roadmap was the establishment of a Summer Studies Program, which evolved into SSP.  Phase 2 envisioned the establishment of a permanent campus, which has now been realized at ISU central campus in Strasbourg.  The goal of Phase 3 was to see the construction of a space-based campus.  The original literature pointed to an orbital facility, whereas Jim Burke’s vision was geared towards the creation of a lunar campus.  This presentation was focused on using tele-reach technologies to create a roadmap for realizing this vision.  Possible milestones included having future students controlling Google Lunar X-Prize rovers on the lunar surface directly from ISU main campus.

Wednesday’s sessions were dedicated to tele-health, and the environment.  There was a presentation on the da Vinci tele-surgery machine, which enables surgery to be carried out remotely.  This has obvious implications for deep space travel, where immediate surgical procedures are out of the question, and also for remote areas on Earth.

The afternoon session featured a presentation from Stephen Clandillon, of Sertit, a Strasbourg based company that uses satellite data to rapidly produce maps for natural disaster response.

The final day covered topics on political, legal and economic aspects of tele-reach technology, and finished with a session on other applications.

In the legal session, there was a presentation on maritime domain awareness which was presented by a representative of the U.S. Department of State, which focused on using additional space assets for augmenting current maritime tracking systems.

The final session of the day featured talks from both Lockheed Martin and Boeing, who both have clear and distinct roadmaps as far as solar system exploration is concerned.  Josh Hopkins from Lockheed Martin described the “Red Rocks” mission concept, which involves sending astronauts to Deimos, one of Mars’ two moons.  A small fleet of rovers would be sent to Mars, to be tele-operated from astronauts on Deimos, allowing for near real-time control, and hence, greater scientific return.

Kurt Klaus of Boeing had a different vision of where we should be heading next.  His presentation, titled “Concepts Leading to a Sustainable Architecture for Cis-Lunar Development,” suggested a more cautious approach, and explained that a trip to the Earth-Moon libration points may be a more sustainable roadmap to follow.  The first test flight of SLS is scheduled for 2017, and it was revealed that there may be an opportunity for a ride share for up to 4 tons of equipment.  Klaus is hopeful that there will be room for a probe to hitch a ride to the L2 point.

The end of the symposium saw Walter Peeters take the stage for some final thoughts on the preceding day’s events.  Conclusively, trends are following Moore’s Law in terms of increased data flows and faster processing power, with higher definition signals enabling people to reach out to each other, particularly in terms of tele-education.  The major aerospace companies seem to have a fair amount of work on their hands over the next few years, especially as replacements for the shuttle come into play, but the one thing that will be a limiting factor in space-based tele-reach, is the age old problem of the speed of light.  Until we rewrite the laws of physics, or figure out a novel way to cheat them, communications lag is still going to be an issue for anyone venturing beyond Low Earth Orbit.