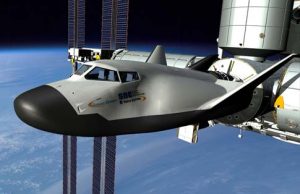 Sierra Nevada Corp. (SNC) Space Systems of Louisville, Colo., has completed its first major, comprehensive safety review of its Dream Chaser Space System. This is the company’s latest paid-for-performance milestone with NASA’s Commercial Crew Program (CCP), which is working with commercial space partners to develop capabilities to launch U.S. astronauts from American soil in the next few years.

SNC is developing its Dream Chaser Space System under NASA’s Commercial Crew Integrated Capability (CCiCap) initiative, which is intended to lead to the availability of commercial human spaceflight services for government and commercial customers.

“Dream Chaser is making substantial progress toward flight with the help of our NASA team,” said Mark Sirangelo, head of SNC’s Space Systems. “The ability to openly exchange information through the work on these CCiCap milestones is invaluable for many reasons, such as communicating Dream Chaser development plans and receiving timely feedback from NASA, all of which help to improve our design and maximize safety and reliability. As we begin our flight test program we have a better and stronger program due to our partnership with NASA.”

A Dream Chaser engineering test craft is being prepared for shipment to NASA’s Dryden Flight Research Center in California this month for its first free-flight test later this year at the center. The test will provide data on the winged spacecraft’s aerodynamic performance during approach and landing on a traditional runway.