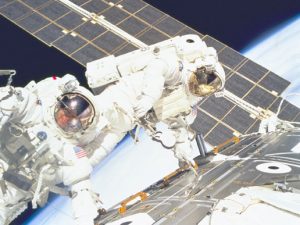 Expedition 30 Russian Flight Engineers Oleg Kononenko and Anton Shkaplerov will move one of the two Strela cranes from the Pirs docking compartment to begin preparing for its replacement next year with a new laboratory and docking module. The 46-foot crane will be relocated to the Poisk module for future assembly and maintenance work. The duo also will install five debris shields on the Zvezda service module and, if time permits, a small experiment on the forward section of the module, an experiment sample pack on Poisk and support struts on the Pirs ladder.

Both spacewalkers will wear Russian Orlan suits bearing blue stripes and equipped with NASA helmet cameras. They will emerge from the Pirs airlock at about 8:15 a.m.

This spacewalk will be the 162nd in support of space station assembly and maintenance. The last spacewalk occurred Aug. 3, 2011. For Kononenko, it will be his third spacewalk following two in July 2008 during Expedition 17. His two previous spacewalks lasted a total of 12 hours and 12 minutes. It will be Shkaplerov’s first spacewalk and the only one scheduled during Expedition 30.