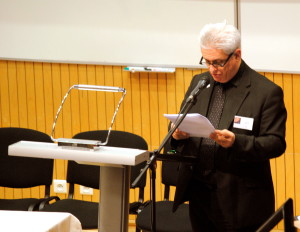 Today’s morning session “Space Debris Removal” continued where yesterday’s sessions left off by introducing the concept of Active Debris Removal (ADR) and its associated issues. Speakers from Europe and Japan covered the political and technical issues involved in the complex issue.  One of the key points brought out in all of the presentations is the fact that the debris situation is growing and will continue to do so exponentially even without additional launches. For this reason the speakers recommended stabilization. In order to stabilize the environment 5-10 large pieces of debris would need to be removed per year, however there are some pieces of debris that due to probability of collision and mass should be removed first.  The actual technology is currently being researched and being recommended to national and international agencies. Politically the situation of ADR is complex due to liability, safety and security issues surrounding relocation of the debris.  However, international cooperation or collaboration is possible and indeed necessary for the successful implementation of ADR.

Are you planning a vacation? Do you want to know what is the weather going to be like? That’s understandable, who would like to have his holiday spoilt by constant rain. The same applies for astronauts getting ready for their voyage to Mars or Moon. In this case, knowing the possible quibbles of space weather is even more important as deadly solar flares and cosmic radiation can put astronauts at risk.

And it’s obviously not only astronauts. Our society depends on electrical power, internet network, satellite communication, cell phones, and television. Powerful magnetic storms can disrupt them all very easily as demonstrated in the middle of 19th century when a series of powerful magnetic storms interrupted telegraph services in Italy, UK, and the USA.  Geomagnetic storms are a result of extreme solar activity. They disrupt the Earth’s protective magnetosphere and cause an influx of highly charged particles into the planet’s system. In orbit, where the protective magnetosphere doesn’t mitigate the power of solar wind, those events regularly damage payloads, interfere with sensors, and disrupt services.

No surprise then that the Symposium on Sustainability of Space Activities focused in its second day on space weather phenomena. As Madhulika Guhathakurta, chair of the Space Weather Session and top NASA researcher stated, coronal mass ejections, solar flares, and cosmic radiation yearly damages amounting to several hundred millions of dollars on satellites, powergrids and communication links. Given our dependency on electricity, the huge percentage of satellite-based communications and ever more sensitive payloads, one can understand the gravity of having efficient space weather forecast.

Dr. Ioannis Daglis of the National Observatory of Athens and member of ISARS and the International Academy of Astronautics explained that the magnetosphere essentially acts as a particle accelerator and in it can be found particles at higher energy levels than in deep space, paradoxically both shielding Earth from radiation effects but increasing danger to passing spacecraft.  He introduced the magnetic storm DST index, a geomagnetic index constructed by averaging the horizontal component of the geomagnetic field from mid-latitude and equatorial magnetograms from all over the world.  Magnetic storms are correlated with radiation belts, mostly accelerated by them, but sometimes also depleted. In the latter case, ULF/ELF/VLF waves resonate with trapped particles in the magnetosphere causing pitch angle scattering and precipitation.

A point made both Daglis and Dr. Norma Crosby is that what is commonly thought of as innocuous space and time is not really so. The gap between the inner and outer van Allen radiation belts, known as the slot, can also experience high energy fluxes that can be damaging to spacecraft travelling in that region, often considered a safe zone. Crosby also pointed out that although solar maxima, such as the upcoming 2013 maximum, are often considered to be the most hazardous, solar minima come with their own challenges. For example, the 2003 solar minimum lasted longer than anticpated based on historical models. The reduced activity led to the near depletion of Earth’s ionosphere, initiating an increase in space debris since the ionosphere was not able to perform its usual orbit-cleansing pulling LEO satellites to burn up in Earth’s atmosphere. The event also led to a jump in galacatic cosmic rays, the most powerful and damaging type of space radiation.

The speakers  agreed that a complex framework for risk assessment, mitigation and forecasting is an important step foreward. Raymond Clinton proposed one such framework involving coordination of space weather data and models on a national basis to prevent the data gaps, overlap, and reliance on outdated data that exist currently. Speakers highlighted the need to develop a crisis management model and to work on onboard forecasting capabilities for deep space missions such as to Mars, since Earth-based forecasting would be unable to relay warning to Mars before solar particles impacted.

Crosby made a critical point regarding space shielding – many times the shielding produces secondary radiation that is more harmful that the primary radiation it blocks. There is a critical need to develop light weight polymeric shielding to eliminate this effect.

An ESA operational software came in for accoloades, the Space Environment Information System (SPENVIS)  as one of the databases that is most up-to-date and useful for operators and researchers alike. 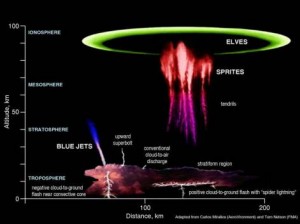 Yukihiro Takahashi JAXA collaborator of the Hokkaido University identified a major challenge to scientific investigations into space weather and atmospheric interactions in that a more integrated approach to atmospheric layer behavior is needed: although scientists find it convenient to differentiate between troposphere, mesosphere, stratosphere, thermosphere, and ionosphere, it is important to remember that those delineations are somewhat artificial. Takahashi went on to discuss the phenomenon of sprites – electrical discharges that occur above lightning events and manifest in brief, usually red, flashes of sprawling light. Such discharges have only been verified within the past few decades and much remains to be learned.

Other Threats to Space Activities

Moving from a packed morning into the afternoon, the subject turned to different elements of sustainability and how it may be threatened. Speakers from ESA and NASA and closely associated organizations alternately addressed the environmental footprint of space activities – primarily emissions from the cars agency employees drive to work – and the need to maintain a sustainable space presence complete with orbital outpost. Former DLR astronaut Reinhold Ewald discussed the unique advantages only available via ready access to an orbital station such as ISS, including providing  a forum for non-competitive international cooperation, availability of a research and technology test bed, engendering space awareness and national pride, and intellectual challenge to spur continued innovation in science and technology.

Legal considerations quickly rose to the fore, with discussion of potential international codes for space sustainability goals and situational awareness, flowing into analysis of the Liability Convention and its coverage gaps. Deborah Housen-Couriel of Yuval Ne’eman Science, Technology and Security Workshop, Tel Aviv University, highlighted the latter particularly in regards to the status of satellite signal interference with respect to the prohibition against inflicting damage to another nation’s space object. A lively discussion ensued on this point, evaluating the potential degrees of temporary and permanent jamming interference and the infliction of physical damage via cyber viruses and whether these aspects are covered under the current Liability Convention (probably not) as well as what steps should be taken to close such gaps.

Colonel Tom Single of the US Air Force Space Protection Program joined the conference via Webex from his station in Afghanistan to delineate exactly what threats to space activities exist and must be managed in future.  Single introduced the 5D’s of cyber threat management: deceive, deny, degrade, disrupt, destroy. These can variously be achieved via EMP pulse, jamming, kinetic damage, and space minefields or intentional debris creation. Single emphasized that all spacecraft are at risk and launching parties will need to decide whether the risk is acceptable. He also presented potential mitigation strategies, including steps to complicate targeting by hostile parties via deception or duplication and increased hardening, maneuverability, and autonomy of space units.

Ram Levi of Yuval Ne’eman rounded out the day with a look at recent presumed cyberattacks and the problem with identifying actors which limits the potential for retaliation and deterrence measures. He discussed examples such as the assumption that ROSAT failures were attributable to cyber attacks, the Stuxnet attack on Iran’s nuclear centrifuges, and the Landsat hacking events whose author remains unconfirmed. The potential variants of cyberattack events spawned several panel discussion points, with Housen-Couriel calling for a code of conduct for cyber issue handling as well as agreement on what constitutes justification and appropriate targets for a preemptive attack  against cyber threats.

This concludes Space Safety Magazine’s coverage of Day 2 of the ISU Symposium on Space Sustainability. Check back for updates on the third and final day addressing Cooperative Approaches to Improved Space Sustainability and Looking Forward and Outward.