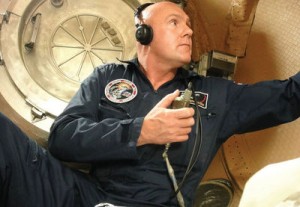 A fully assembled and operational International Space Station will receive ESA astronaut André Kuipers at Christmas in the fourth European long-duration mission to the orbital outpost.

André is scheduled to be launched on 21 December from the Baikonur Cosmodrome, in Kazakhstan, on a Soyuz spacecraft as flight engineer for Expeditions 30 and 31, together with Russian cosmonaut Oleg Kononenko and NASA astronaut Don Pettit. They will remain in space for nearly five months as part of the resident, international six-astronaut crew.
PromISSe is the first long-duration mission for a European following the end of the Shuttle programme in July. With the ISS lifetime extended to 2020, André’s presence on the Space Station inaugurates a new decade of optimal utilisation to bring the benefits of space science, technology and education back to Earth.

This will be André’s second visit to the ISS after his 11-day Delta mission sponsored by the Dutch government in April 2004. Back then he was also launched on a Soyuz rocket. “It feels like going back home, but the house will have doubled its size since my last visit,” says André. During Delta, the Space Station had only four main modules (Zarya, Unity, Destiny and Zvezda) and two permanent crewmembers.
André will be the first Dutchman to make two spaceflights. “I remember how thin the Earth atmosphere looks like from space and how black the Universe is. It made me realise that billions of people live in a very fragile planet. We really should take care of it,” recalls André.

The transition from ISS assembly to full operations gives a boost to scientific research. With less time to be spent on assembly tasks, the crew hours available for science during PromISSe will be significantly increased. “We have a pretty busy schedule. We will be conducting scientific experiments around 40 hours per week,” says the astronaut.
He is himself a medical doctor who has been actively involved in microgravity research for more than ten years. “The data I will collect from my own body can bring valuable information about the effects of weightlessness on the human body. This research may help in preparation for a future mission to Mars,” he posted on his blog.

During the 148-day mission he will take part in around 30 ESA experiments covering a range of disciplines: human research, fluid physics, materials science, radiation and solar research, biology and technology demonstrations. Most of them will be carried out in Europe’s Columbus laboratory, a world-class research platform in space. André will celebrate the fourth anniversary of this European laboratory module while in orbit.

Countermeasures for bone loss, the study of headaches in space and mapping the radiation environment inside the Station are among the experiments related to human exploration. André will not only perform experiments for ESA, but also more than 20 for the US and Japanese space agencies requiring the use of almost 30 different research facilities in the various ISS laboratories.
As flight engineer on the Station, André will have several assignments, ranging from system aspects to payload operations. He will be on hand for processing of visiting vehicles. He will be the prime crewmember for the rendezvous and docking operations of ESA’s third Automated Transfer Vehicle Edoardo Amaldi(ATV-3).

The largest servicing vehicle for the Station today will deliver essential cargo, perform regular ISS orbit reboosts and attitude control manoeuvres. It will enable debris-avoidance manoeuvres for the whole complex if needed.

André Kuipers will have his eyes on our planet. He will share some of the unique views of Earth from the Station’s Cupola and invite children to become involved in a wide range of educational activities. Space is the exciting platform chosen for primary and secondary pupils to learn, together with the astronaut, about life, biodiversity and climate change on Earth.

Science activities will be transmitted from space to classrooms across Europe with in-orbit demonstrations of experiments on convection and wet foam formation. André is also an advocate for health and human well-being. He will encourage the new generation of space explorers to stay fit by following the second edition of the international education initiative Mission X: Train Like an Astronaut.

The video below, courtesy of ESA, shows André Kuipers in training for the PromISSe mission.