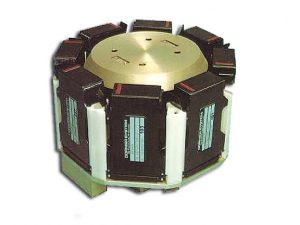 Centrifuge system designed by Astrium and Nanoracks will be sent to ISS by NASA (Credits: Nanoracks).

Source: NASA NASA, Astrium Space Transportation and NanoRacks LLC are teaming up to expand the research capability of the International Space Station through delivery of a small commercial centrifuge facility that will conduct molecular and cellular investigations on plant and animal tissue. The centrifuge enhances NanoRacks’ existing suite of lab equipment aboard the space station, which includes microscopes and a plate reader used to detect biological, chemical or physical activity in samples. Astrium Space Transportation handed over the research centrifuge to NanoRacks LL, during a ceremony Tuesday, Feb. 14 in Houston. Astrium North America adapted the centrifuge — originally built by Kayser Italia for use on space shuttle missions — for use in the station’s NanoRacks Platform-3. The commercial research team funded the centrifuge. NASA will deliver the centrifuge as part of its responsibility to provide transportation for U.S. National Laboratory research and facilities to the space station. Under its partnership with Astrium, NanoRacks will add the centrifuge to the two racks of laboratory support equipment already on the station. The centrifuge is sized to fit the standard NanoRacks architecture, which can fly on any launch vehicle. “This is an important step in the expansion of National Lab facilities aboard the space station,” said Marybeth Edeen, U.S. National Laboratory manager at NASA’s Johnson Space Center. “Having companies develop research and facilities for the National Lab with their own funding demonstrates the beginnings of the commercial space marketplace that the National Lab was created to serve.” The platform and centrifuge were produced in a short time at low cost. Both NanoRacks and Astrium expect announcements in the near future about more joint projects. NASA has manifested the NanoRacks-3 platform and the Astrium centrifuge on a Russian Progress cargo ship scheduled for launch in summer 2012 under its cargo agreements with the Russian Federal Space Agency. The video below introduces the NanoRack “Plug and play” infrastructure that simplifies experimental equipment design for ISS: